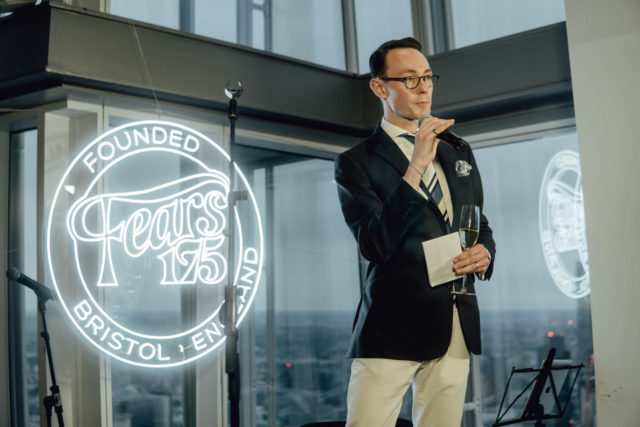 A 175 year old British brand celebrating its anniversary and five years since its relaunch, what better way to celebrate than with a big party at the top of The Shard and the launch of a rectangular shaped new addition to the Archive collection?

Nicholas Bowman-Scargill, the company’s 4th managing director, thought this would be the best way to go about business in this momentous year, pulling out all the stops in watch design and party planning.

The get together at the top of The Shard was a great celebration of the brand itself but what it also managed to do was bring an industry together which had been shackled away from each other for so long. Seeing faces in the flesh rather than through a screen was something special as British business kicks back into gear.

Speaking of business, Fears has gone from strength to strength since its relaunch in 2016 culminating in this year’s anniversary bash. Bowman-Scargill was always keen to do things ‘properly’ and rightly so.

Taking each step and year as it came, Fears has built a business ready to scale up when the time is right. Another new watch release this year to celebrate the anniversary could see the brand put a marker down in terms of numbers and look into retail outlets from the beginning of 2022. 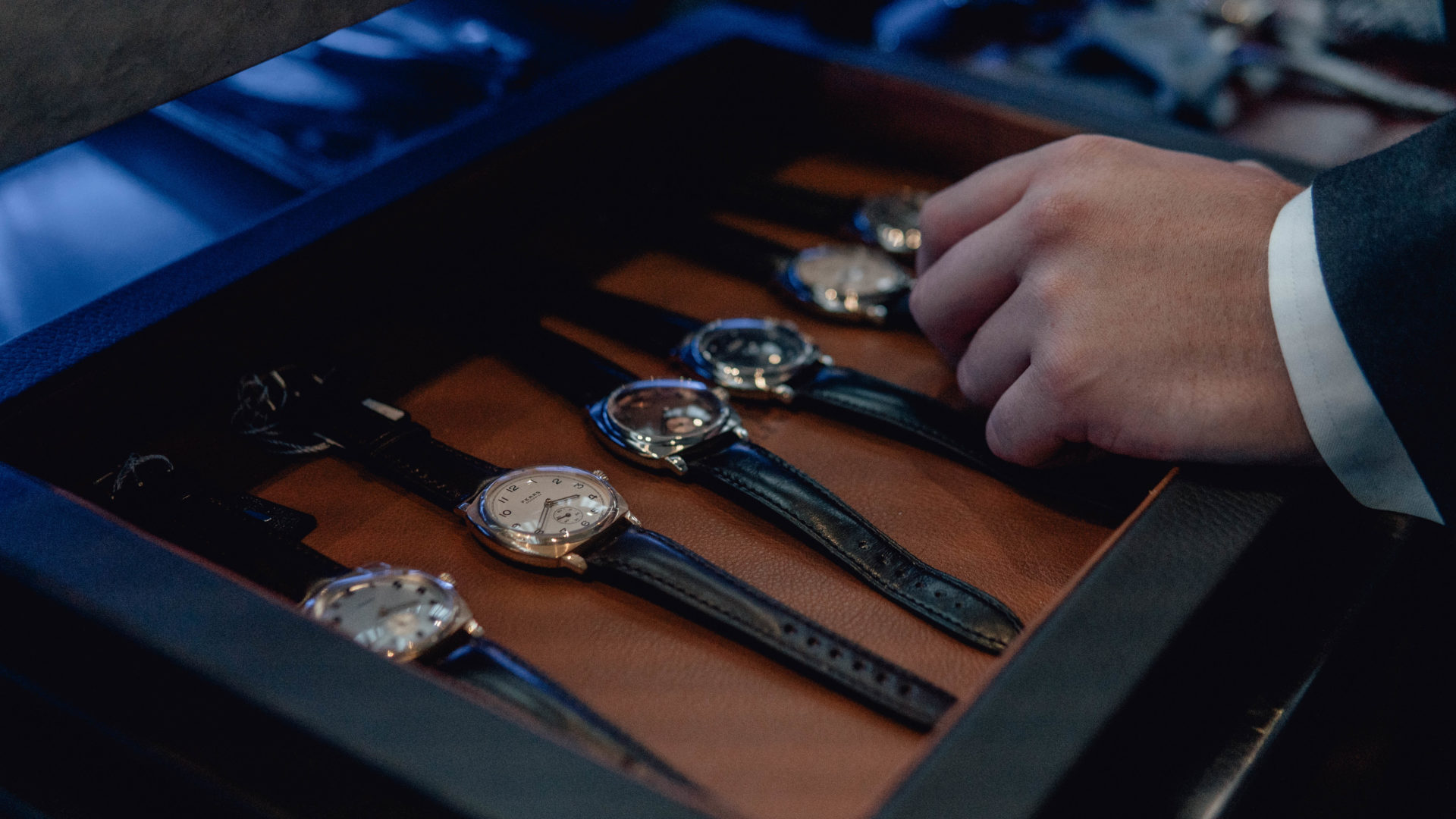 Speaking to Nicholas Bowman-Scargill at the WATCHPRO offices last month, he explained that the work over the last half decade has gone into getting Fears to where it is today.

He said: “We absolutely want to start talking to those retail partners up and down the UK now. Most likely starting towards the end of 2021 or the beginning of 2022 we want to be alongside some of the bigger brands in store windows.”

“Those brands have such great stories to tell but we do too. The watch collecting market is going from strength to strength but there is also such an appetite for those who love watches but only buy one, two or three in their lifetime for special occasions.”

Mr Bowman-Scargill continued: “Whether it be a 21st birthday, an anniversary or an engagement gift, I want Fears to be an option for those occasions too. How great would it be for someone to be interested in a British watchmaking brand and they can look at Christopher Ward, at Bremont and then at the Fears collection and discover our 175 year history. In that sense I believe we have a lot to offer to the market.”

To do so of course, Fears will have to seriously grow production from where they are in producing around 500 watches every year now. Getting to that 5000 a year number is a mean feat but is one the brand is confident of being able to reach given the position it is now in due to the prudence over the past five years.

A former Rolex employee, Mr Bowman-Scargill restarted the business in 2016 with just £30,000. He managed to drum up the funds made from selling personal possessions and various items with his husband.

Warned by many in business and in the industry that this wouldn’t be enough, Bowman-Scargill showed he was a serious operator from early on in his career.

With little business management experience, he managed to do a lot of the work himself in those early years in giving the company a strong foundation in terms of not only business acumen but also quality watchmaking.

Acknowledging how he actually kicked things off with a quartz watch, Bowman-Scargill said there was no sacrifice at that time in the business in terms of quality of design. Only with the success of that first piece, he has managed to scale up to sticking with the same high quality, but now including automatic movements.

The latest release, the Archival 1930, is a re-creation of an Art Deco style rectangular watch Fears made in 1930, which has been re-introduced using new-old-stock movements dating from the 1930s and 1960s. 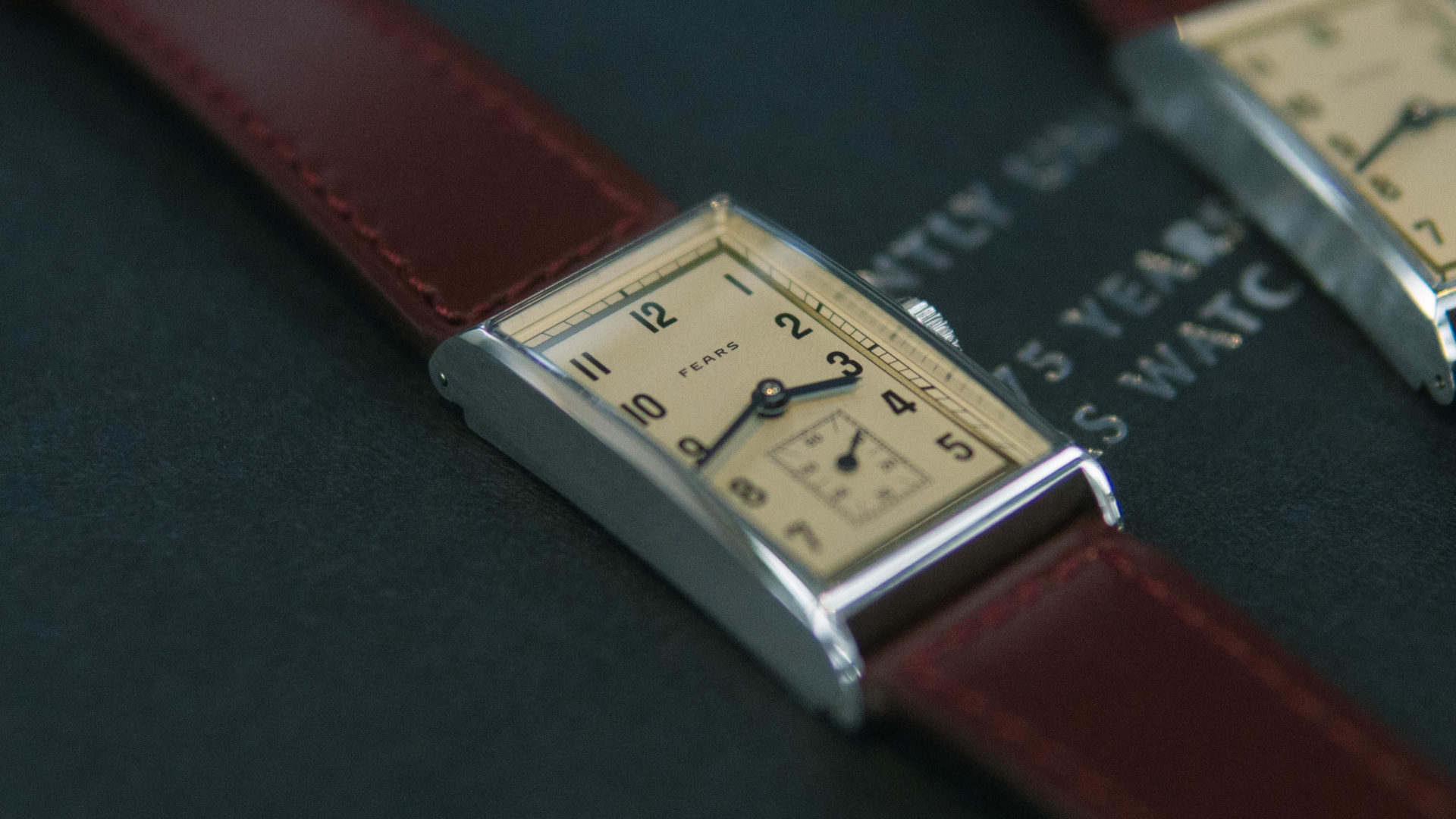 The case of the Archival 1930 is machined from 316L stainless steel in matching proportions to the 1930 original, simply increased in size slightly to suit modern tastes.

The slim, rectangular case features a curved profile that comfortably hugs the contours of the wrist, while linear graining is used on the case sides and back with the svelte bezel, lugs, and case back bevel featuring a deep polish, adding a subtle contrast.

Finally, each Archival 1930 is fitted to a vintage-style handmade Oxblood Red calf leather strap. The bespoke coloured leather used is tanned in Bristol by Thomas Ware & Sons, Britain’s oldest vegetable tanner, the same tannery who created the leather for Fears’ watch straps when the original watch was made in 1930.

The first watch, with the founding year, 1846, on its caseback, has been donated to the Bristol Museum for their permanent collection.

The two models differ by the movements that power them, with the two-handed Archival 1930 (136 watches) using a new old stock manual winding movement dating from the 1960s.

Both are movements that Fears used in the past and both of them, having never previously been used, has undergone a full re-build and recondition in the workshop while receiving an upgraded mainspring to enhance reliability.

Commenting on the launch of the new Archival 1930, Nicholas Bowman-Scargill, (4th) Managing Director of Fears Watch Company, said: “I am privileged that the 175th anniversary of Fears’ founding has fallen during my tenure as managing director. A significant anniversary like this had to be marked in a special way, which I feel the Archival 1930 captures perfectly.

“The launch of this first watch in the new Archival family is a delightful way of allowing us to pay respect to our heritage and extensive archive, in a more direct way, while not being beholden to it. By recreating this elegant watch that we made in 1930, using original movements from the period, and finding a subtle way to mark the 39 dormant years I feel we’re doing this anniversary justice.”

Looking back at the last five years, Bowman-Scargill describes his now somewhat privilege to be surrounded by a great team. Allowing the company to grow around him is something he treasures to see and rather self-deprecatingly, says just the big ideas, quality control and blue sky thinking are left down to him. 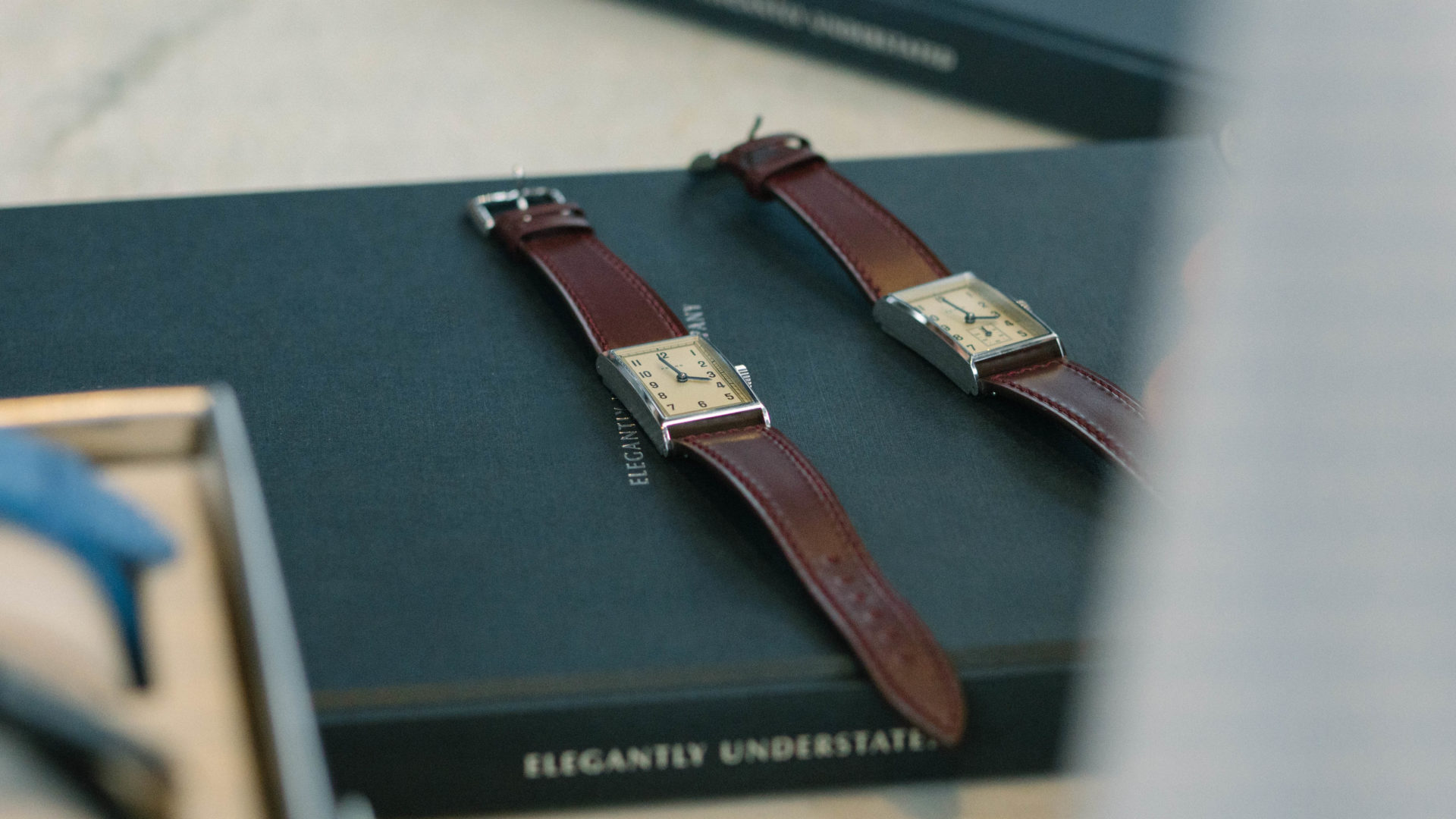 As most managing directors will know, Bowman-Scargill will be tasked with a lot more pressure and responsibility than this. That said, the trust he puts in his team is paramount to the operation.

He commented: “Having a great team around the place and attracting the right talent is so important to us. I have always ensured we pay an hourly rate which is well over the national living wage and also maintain that I, as managing director, am receiving the lowest hourly rate in comparison with the staff we have.

“It may be a surprise to some but we have such a great culture and such a fantastic working attitude, it’s a great place to be. The talent we have at Fears is amazing and the staff deserve to be rewarded for the work done in that sense.”

Not afraid to get his hands dirty, Bowman-Scargill was putting in work at ASDA during lockdown with watch sales drying up for a short period when the pandemic first hit. Despite that though, he said the Fears business model set them apart.

With no mass retail presence as of yet, he explains how Fears was and is ready to scale up and meet the needs of retailers all while offering a personal customer experience for each and every customer.

On this, Bowman-Scargill said: “The personal experience for our customers is so important and that will continue with retailers. We ensure each customer will always be a Fears customer and when dealing with the relevant people at retail level, this will always be the same.

“We pride ourselves at Fears on the human interaction side of things. If you send an email to us in the morning, the likelihood is that you’ll have a reply within a couple of hours. If you give us a call, a phone will be answered by a human and put straight through to the right department. From the outset we’ve done that and know how important that is. The structure we’ve built means that with scale, that will not change.”

Reflecting on the anniversary year which has seen the launch of a book, a watch loan service and new product, Bowman-Scargill does so with a smile on his face.

He concluded: “The past five years since Fears was re-established have been incredible, with watches bearing the Fears name once again being worn on wrists all around the world and makes me start to think how we might celebrate the 200th anniversary in 2046.”