Once near-sacred fire-breathing hunks of rolling Americana, Detroit muscle cars are a fast-dying breed, considered a hard sell in an increasingly electrified future. Even Cadillac, which has been producing such brawn in a three-piece suit since it debuted the 400 hp manual-transmission CTS-V in 2004, is getting out of the game: The 2022 CT5-V Blackwing will be the brand’s farewell to tire-smoking, V-8 powered rear-drive sedans. Fittingly, though, that swan song is more of a furious roar. Starting at $84,990, the CT5-V Blackwing is Cadillac’s fastest production car to date, with a top speed of over 200 mph and a 3.6-second sprint to 60 mph. And, yes, it comes with a stick—standard.

While exiting pit lane at Virginia International Raceway (VIR), even a light brush of the throttle hints at the ballistic capability of Cadillac’s most potent engine ever made, the hand-built, 6.2-liter supercharged Blackwing V-8 with 668 hp and 659 ft lbs of torque. Managing all that brute force is the Tremec six-speed manual transmission, Michelin Pilot Sport 4S rubber, the automaker’s largest stock brakes and Cadillac’s next-generation Magnetic Ride Control system, which assesses conditions roughly a thousand times per second and makes suspension adjustments accordingly. (Sure, you can knock off 0.2 seconds from the zero-to-60 time—while adding 19 pounds—if you choose the optional 10-speed automatic transmission, but we suspect the Blackwing will appeal strongly to purists.) There’s even a No Lift Shift feature that allows full throttle while engaging the clutch. 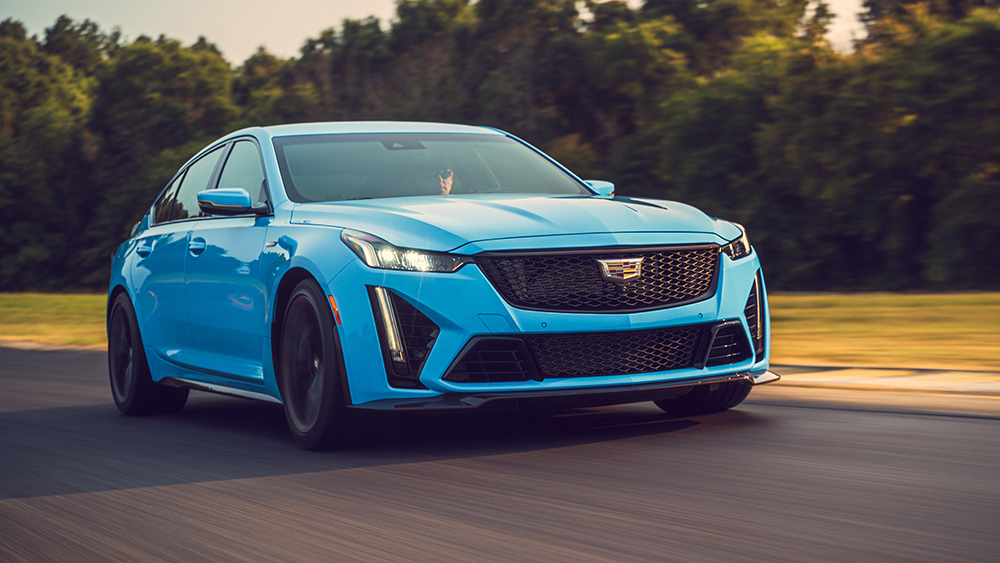 The supercharged 2022 CT5-V Blackwing on the road.  DW Burnett

On VIR’s straightaways, the exhaust note blasted all the right Motown sounds, and the four-door tackled NASCAR Bend and Left Hook corners with remarkable prowess. Around the sharp, tricky Oak Tree Curve, however, the sedan’s 4,123-pound heft made itself known; staying on the racing line there became a question with a seemingly different answer each lap.

The plush cabin belies the vehicle’s raw athleticism, with 18-way power seats, suede-and-carbon-fiber trim, a 10-inch touchscreen and a 16-speaker AKG sound system. But the interior isn’t what anyone will remember about the Cadillac CT5-V Blackwing. The lasting impression will be of a parting gift to gearheads, a car soon to be one more entry in another of motoring’s bygone eras, a brutal and slightly bonkers piece of fancy Detroit muscle with a throwback eight-cylinder heart. Deposits for the 250 introductory examples were reportedly placed within three minutes of the car’s reveal (and only a limited number in total are still available to order); those quick enough to snag one have snagged a rare beast indeed.

Forget Pools and Cinemas: Artful Wine Cellars Are the Latest Must for Yacht Owners