The fifth generation of the Laureato, the Girard-Perregaux’s take on the luxury sports watch with an integrated bracelet, was launched in 2017 as a permanent collection, following a limited edition model presented in 2016. This modern evolution of the model has turned the Laureato into the brand’s best-selling collection. We are taking a closer look at one of the most luxurious iterations of the model, standing out for its attractive pink gold case and bracelet, complemented by a deep and exquisite black onyx dial. And to understand this model even better, we’ll also be recapping the model’s history. 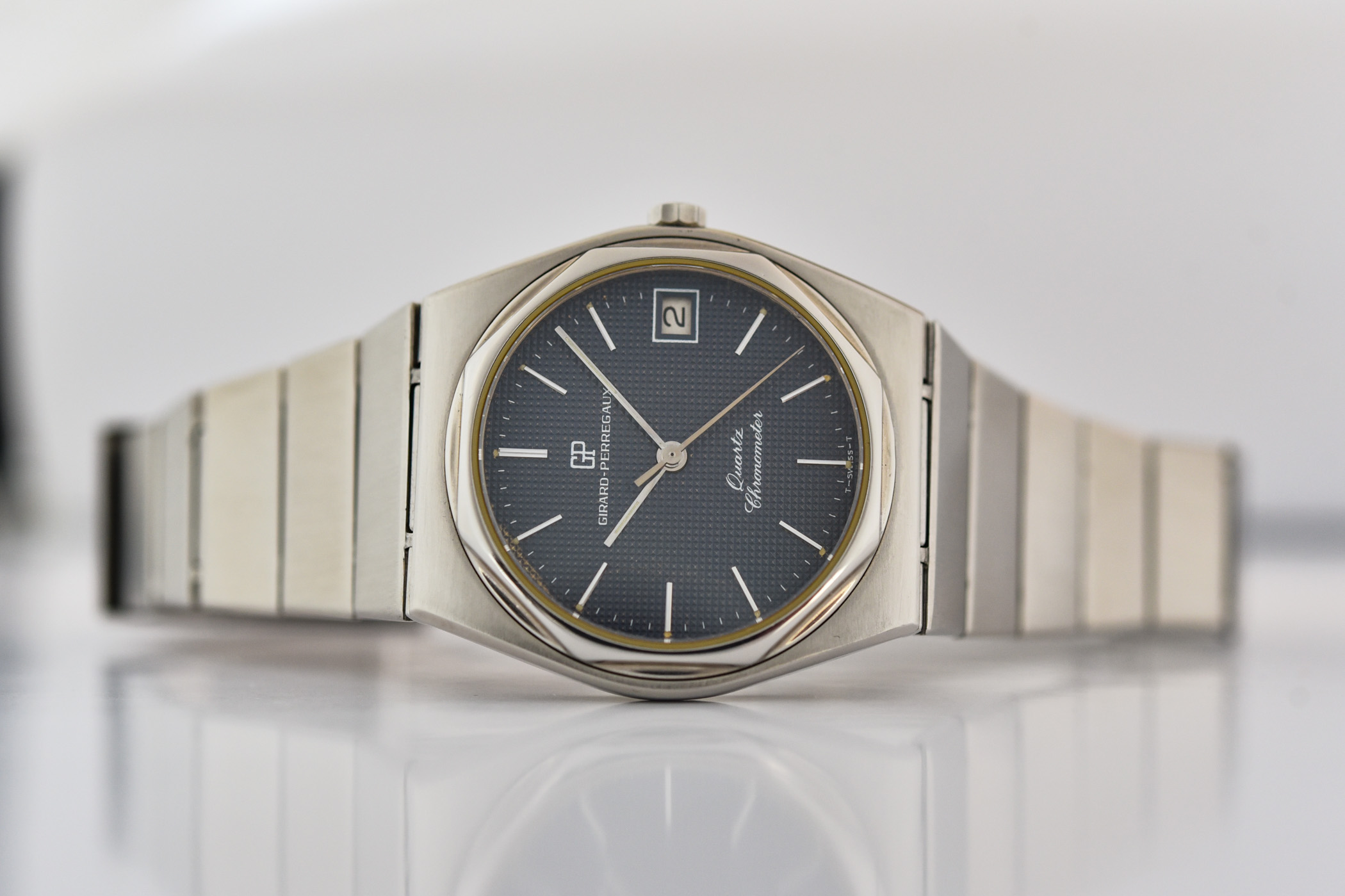 The Girard-Perregaux Laureato was one of the precursors of the luxury sports watch category and appeared in 1975, just three years after Audemars Piguet’s trailblazing Royal Oak, and a year before the other icon, the Patek Philippe Nautilus. The brand’s historian, Willy Schweizer, explains that the design with an octagonal bezel and the integrated bracelet was proposed by an Italian company specialising in jewellery (Calderoni) and then re-modelled internally. The model was not called Laureato yet but by its reference name or Quartz Chronometer. 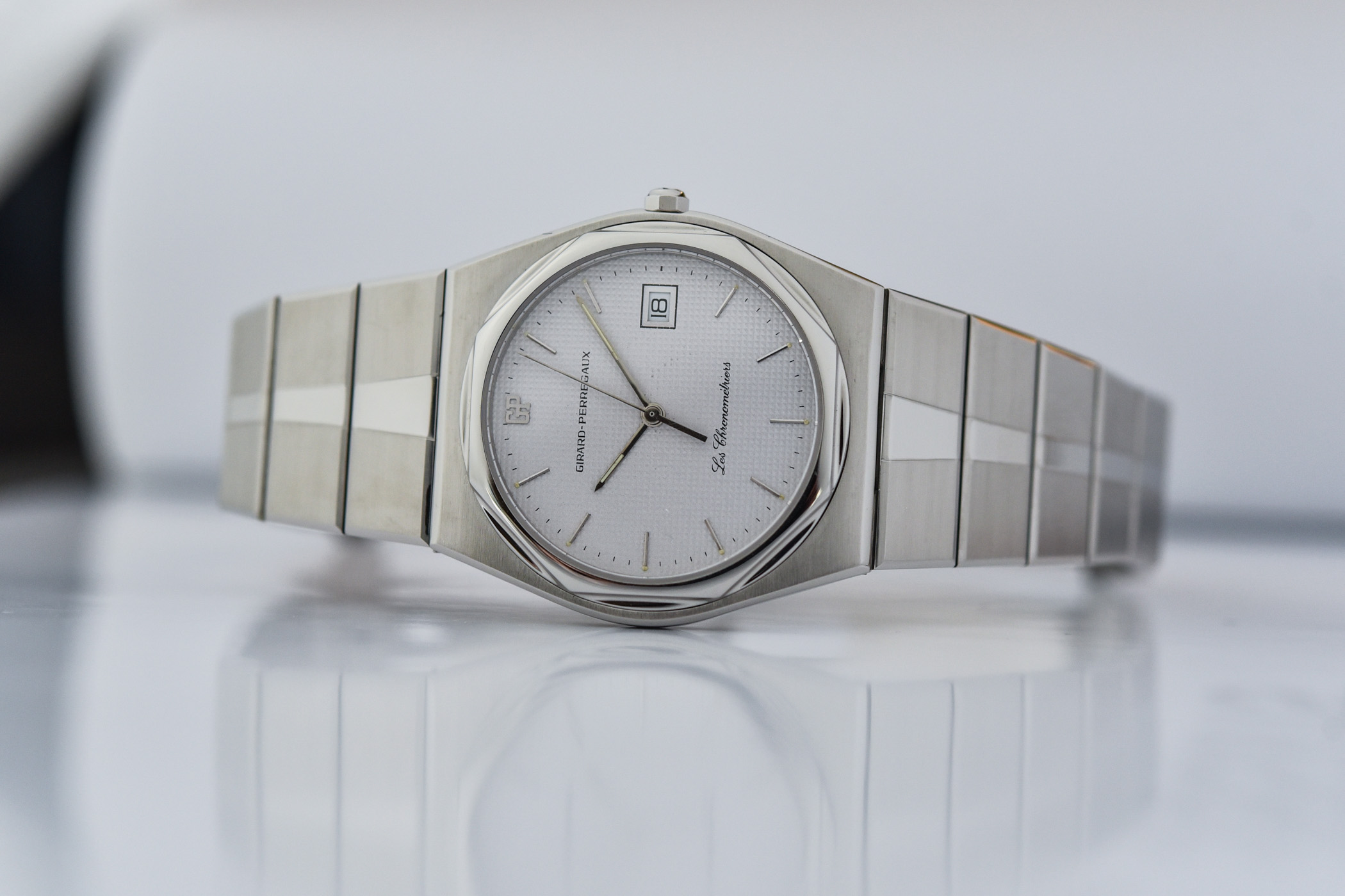 Back then, the rather new and modern quartz movements were seen as an evident option – all the more as Girard-Perregaux was one of the precursors of the technology. Indeed, the brand released the first industrially-produced series of Swiss quartz watches, manufactured movements for Jaeger-LeCoultre or Favre-Leuba and set the frequency of their movements at 32,768Hz, which became an industry standard. 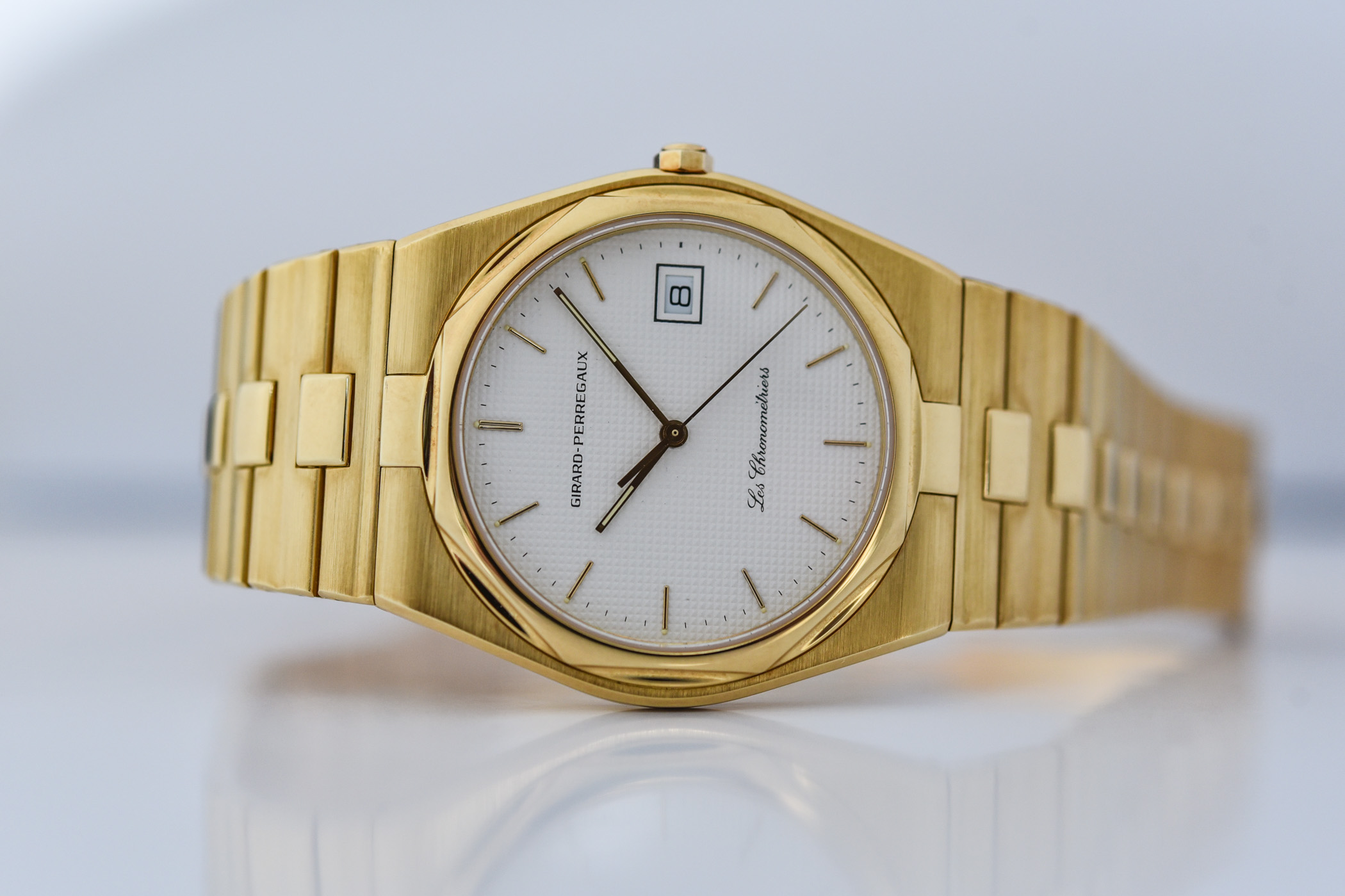 The second generation of the Laureato was created in 1984, in particular with an update of the bracelet, showing the addition of a mid-link. The model was still powered by quartz movements, as evidenced by the Les Chronométriers signature on the dial. The Equations models were fitted with movements combining quartz-based movements with mechanical complication modules. 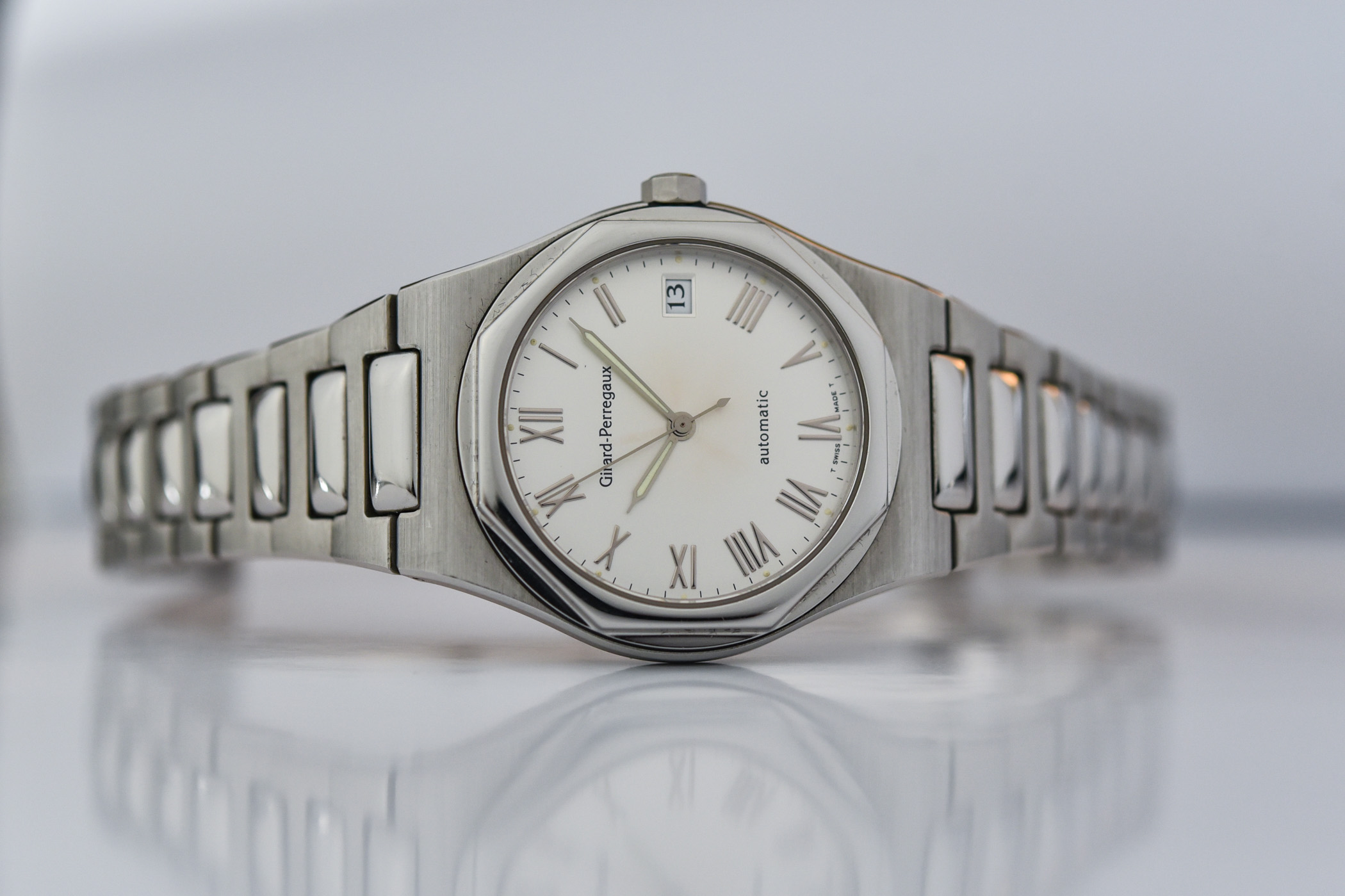 Presented in 1995, the third generation is a re-design by Gino Macaluso, who had taken over the La Chaux-de-Fonds manufacture in the early 1990s. The model is powered by the ultra-thin automatic calibre 3000, in particular as Girard-Perregaux was one of the very few brands to produce mechanical movements in-house at the time. This is the movement when the name Laureato appears. Laureato is the Italian for Graduate. 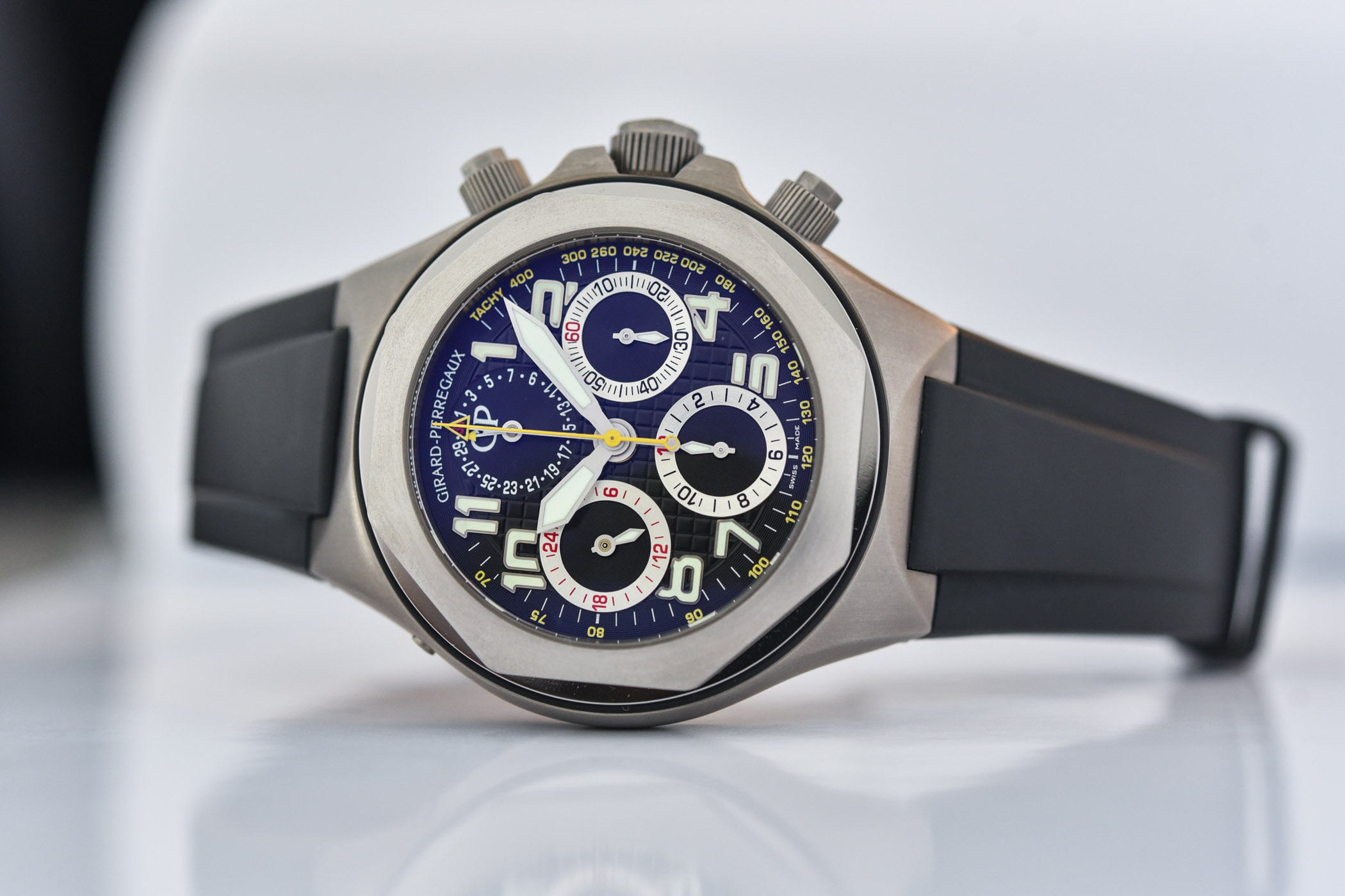 Inaptly named Evo3, the fourth generation of Laureato was presented in 2003, bringing more modern shapes to the case. Numerous versions of the model were presented, on bracelets but also on rubber or leather straps. 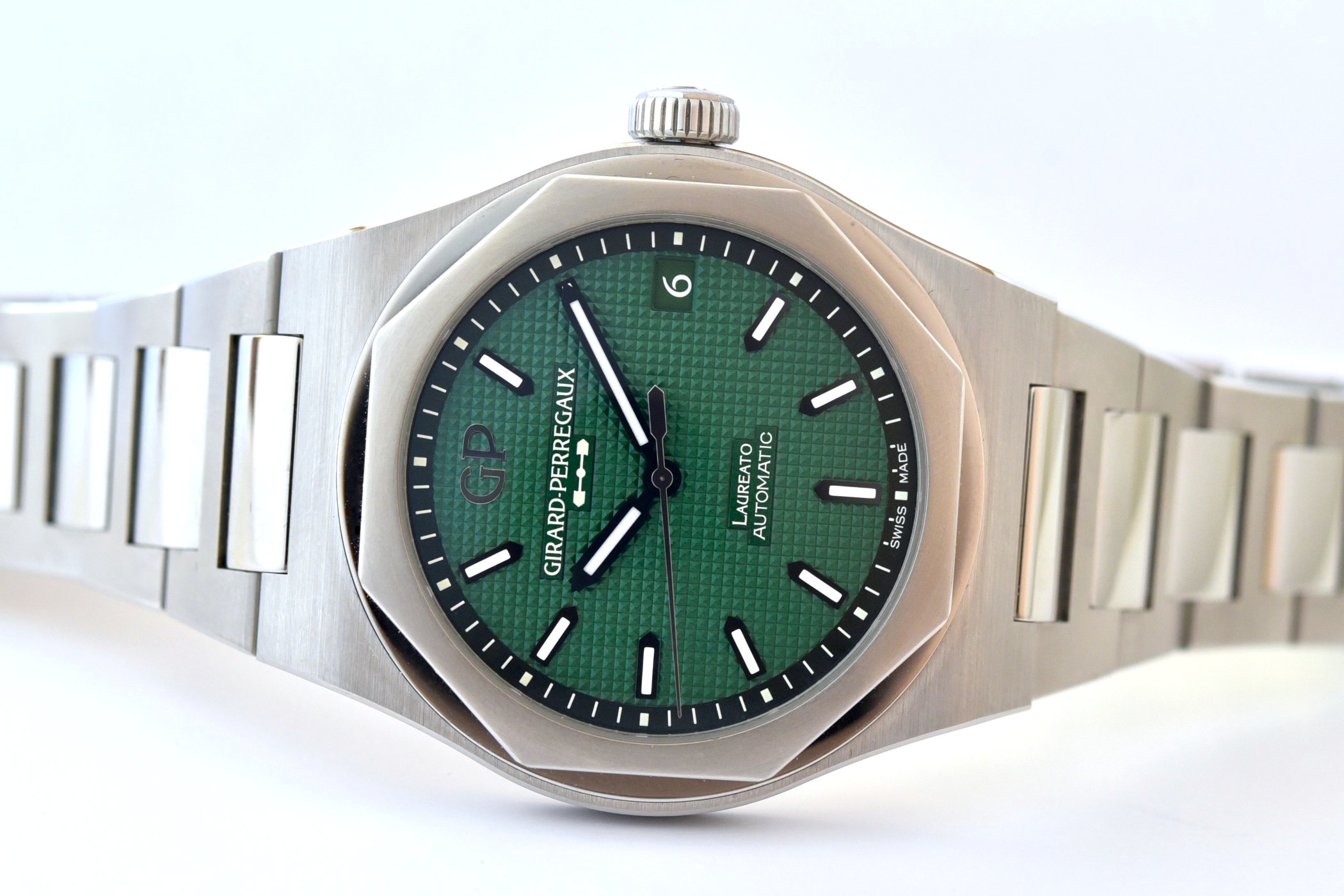 Following the death of Gino Macaluso in 2010, the 2012 Girard-Perregaux Hawk was inspired by the Laureato and Sea Hawk collections. In 2017, the curtain rises on a new chapter in the history of the Laureato. With this tasteful re-design, the model returns to more classic codes. It becomes a collection available in 4 sizes: 44mm, 42mm, 38mm and 34mm, with everything from time-and-date to chronographs or perpetual calendars, to the more robust Laureato Absolute (the equivalent to the Royal Oak Offshore, if you like). 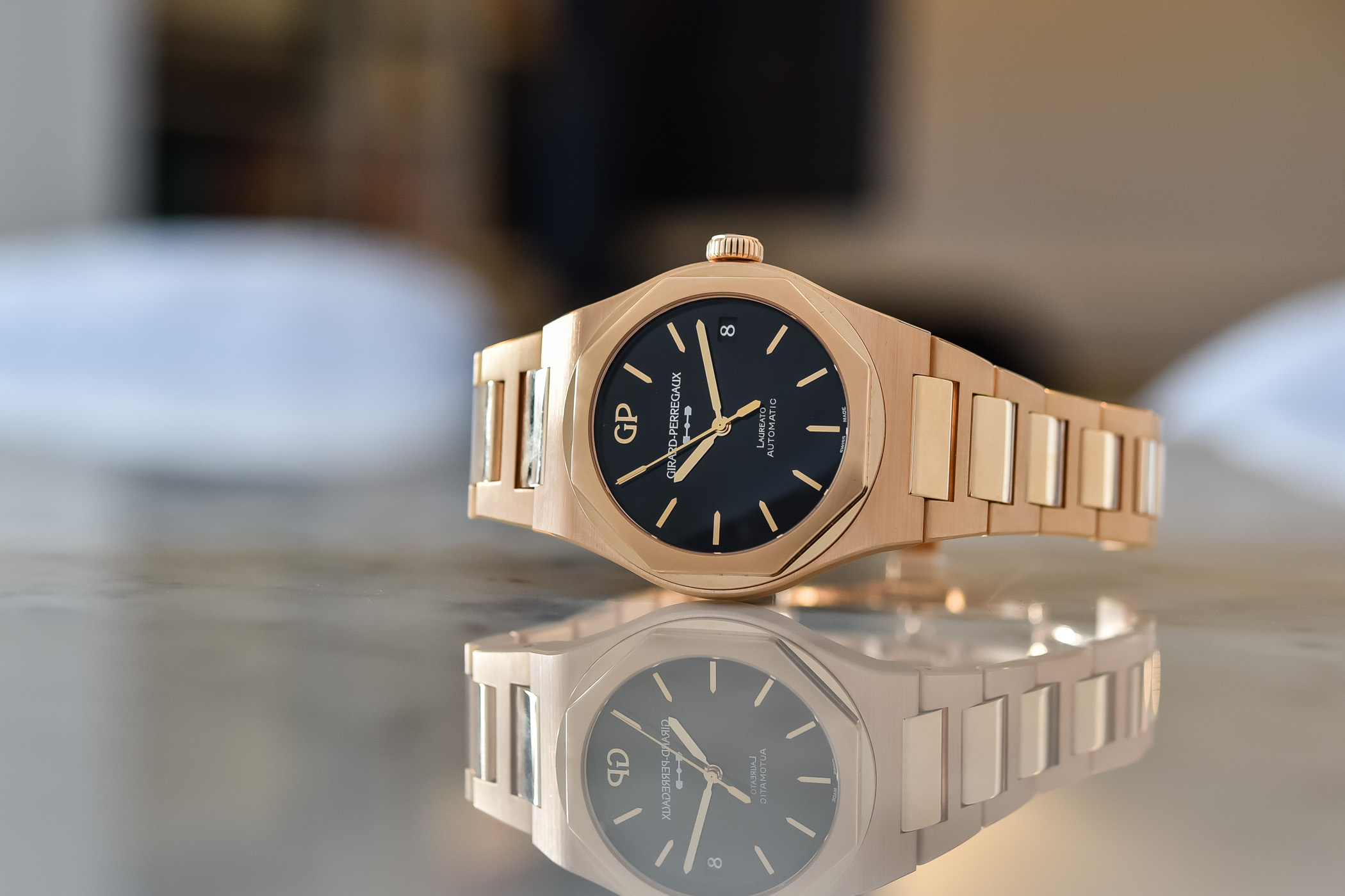 Presented earlier in 2022, the Laureato pink gold and black onyx comes in 42mm diameter. The tonneau-shaped case combines geometric and sporty lines, together with classic elegance. Its bezel very much reminds of a bolt with a round base topped by an octagon. The case and bracelet are seamlessly integrated. The bracelet tappers down to the buckle and combines brushed surfaces with a brightly polished centre link. The water resistance is rated at 50m – one could expect a bit more but this should be perfectly sufficient for a watch you obviously don’t expect to dive with (specifically with its solid gold case and bracelet). 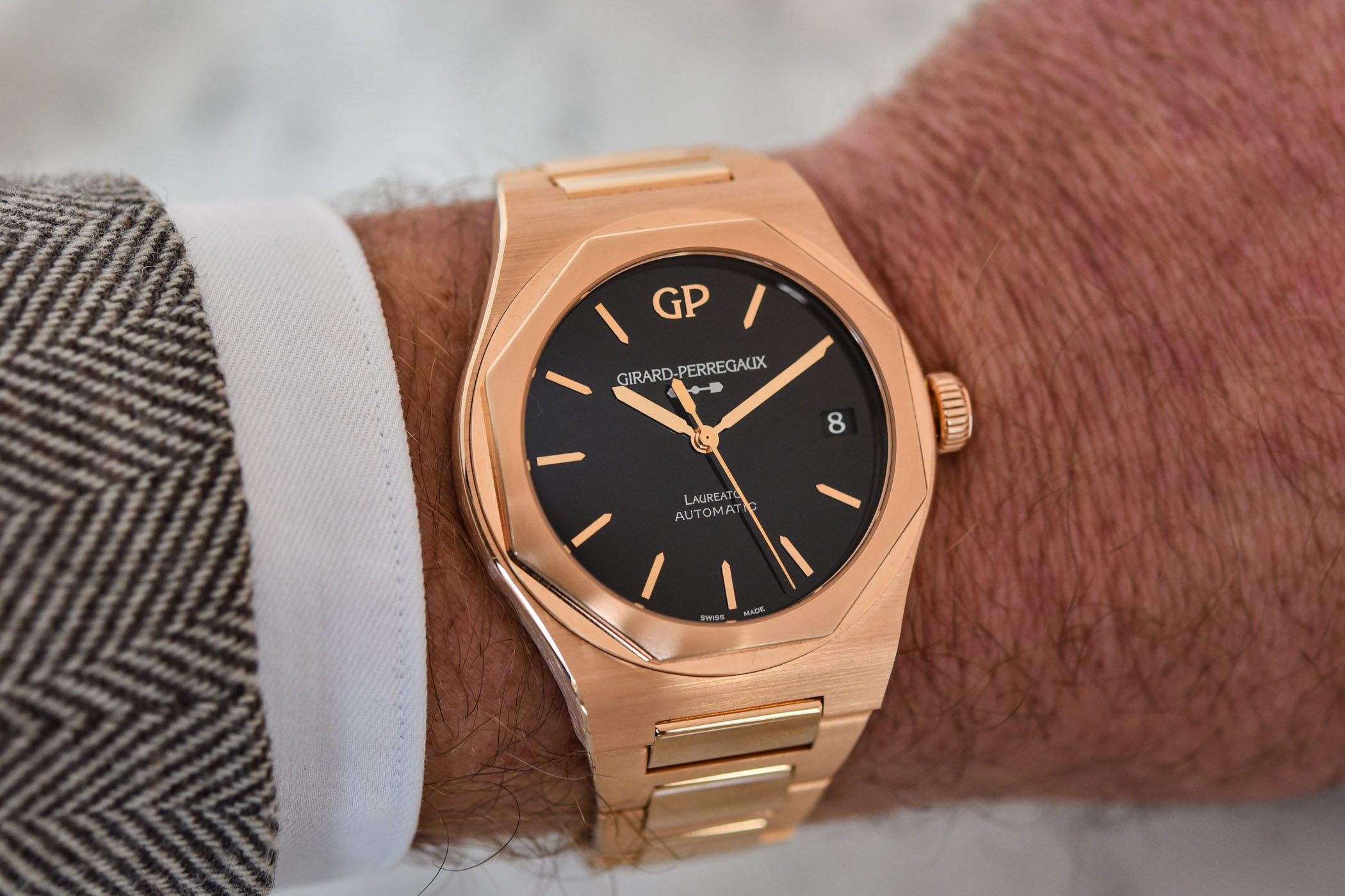 Most Girard-Perregaux Laureato models feature hobnail-patterned dials. Here, the 5N pink gold case and bracelet are paired with a semi-precious stone dial, in deep black onyx. This alluring combination works perfectly and consolidates the model’s black tie look. The onyx dial is crafted by hand. The stone has to be cut into a very fine and even sliver before being shaped and polished to a mirror-like sheen. According to the brand, no fewer than 15 operations are required to achieve the glossy smooth finish. The applied markers and GP logo at noon are in 18k pink gold too, and the baton-style hands are gold plated. 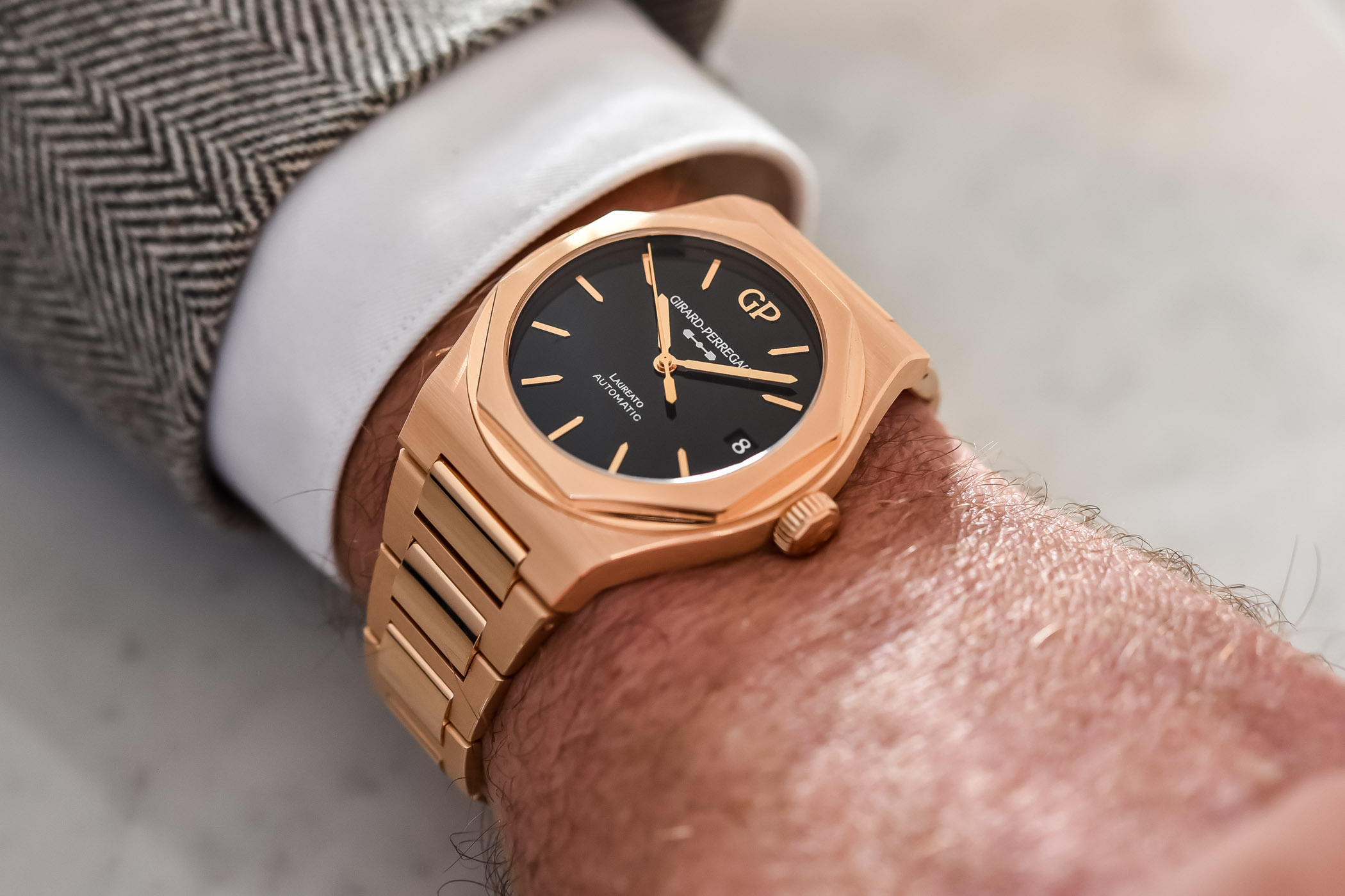 Turning the watch over, the exhibition caseback allows you to discover the calibre GP01800. This 30mm engine is a modern movement developed in the 2000s. It runs at 4Hz and comes with 54 hours of power reserve. The oscillating weight is made out of pink gold. The decoration is classic with Geneva stripes, perlage and the GP manufacture eagle logo engraved on the barrel bridge. 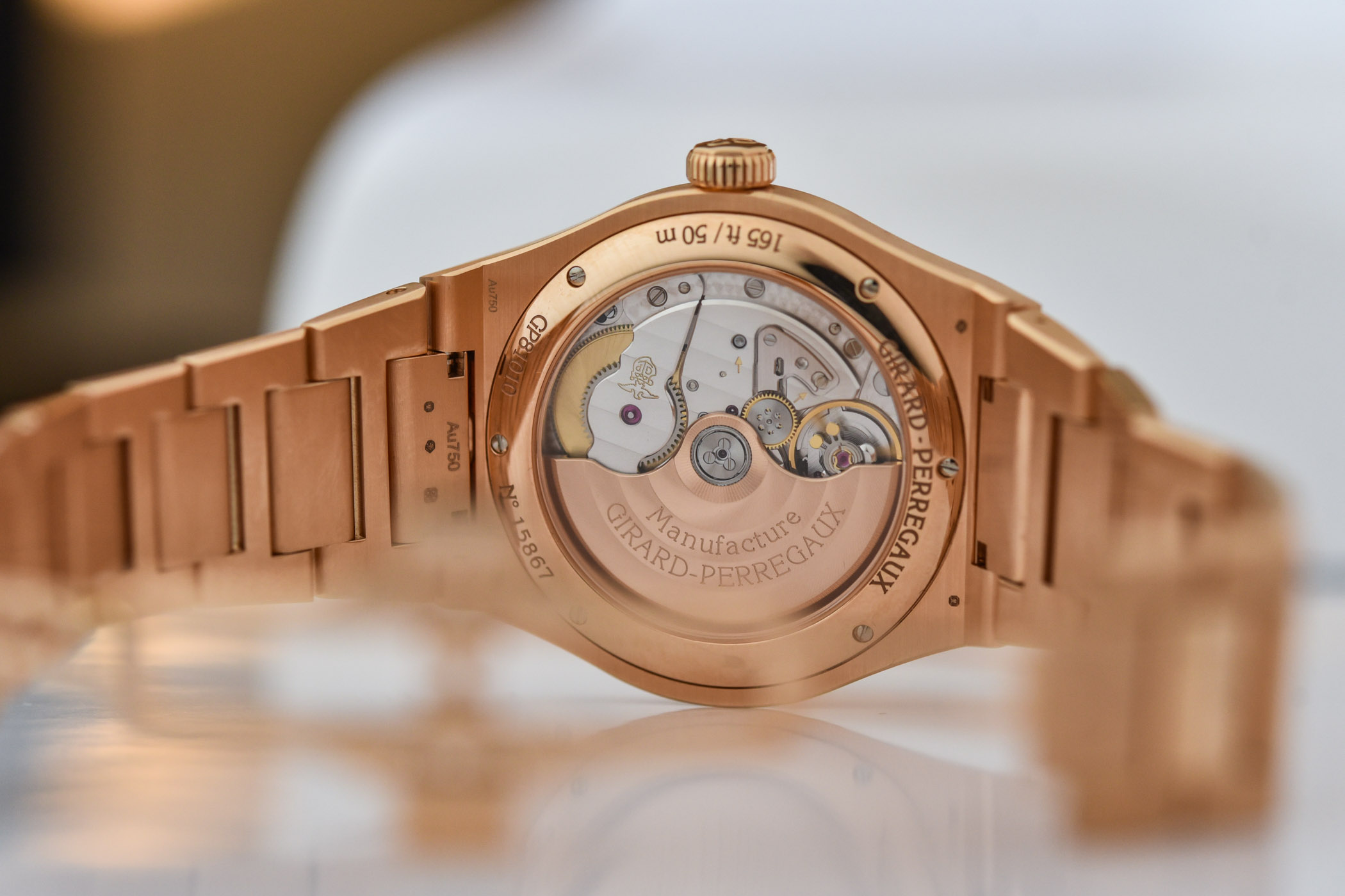 With its beautiful deep black dial and solid pink gold case and bracelet, this high-end edition of the Laureato is certainly a looker. The black and gold combination really works. It stands out and is surely striking, but retains a certain elegance. As you would expect, the heft is noticeably different from that of the steel version. You need to be ready for that but it brings a tactile feeling of luxury.

The Girard-Perregaux Laureato 42mm Pink Gold & Black Onyx comes on an integrated pink gold bracelet or a black alligator strap, both with a triple folding clasp. It has been available since September 2022. The retail price of the model on gold bracelet is CHF 51,800, EUR 54,500 or USD 54,300.