Suh highlights the savoir faire behind the maison’s two signature collections with a new series of artful photographs.

A long-time friend of Van Cleef & Arpels, Suh perfectly understands the maison’s universe and values, which is evident in the elegance and delicacy of her past three collaborations with the house. In 2018, the loving animal couples from the High Jewellery collection, L’Arche de Noé Racontée par Van Cleef & Arpels, were reimagined by Suh in poetic compositions that each illustrated a story related to Korean art and culture. The following year, she created another series of images that combined Korean heritage and Van Cleef & Arpels’ Heritage collection.

Last year, she created photographs of gentle Lucky Animals and graceful Butterfly clips that were imbued with refinement. She imagined charming settings created from handcrafted hanji (traditional Korean paper) flowers using traditional Korean techniques and drawings in which the jewels seem to come to life in their natural environment.

Now, for the fourth collaboration, she has realised her artistic vision into two new series of photographs depicting the Maison’s savoir faire with gold: guilloché as featured in the Alhambra collection and Perlée golden beads. 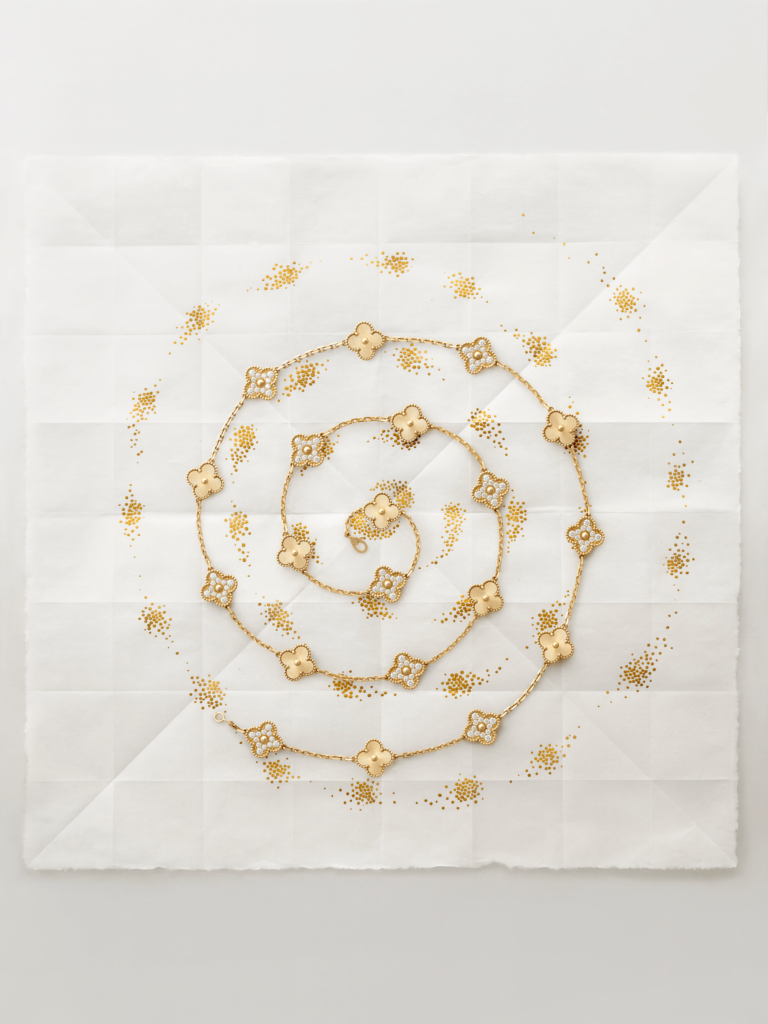 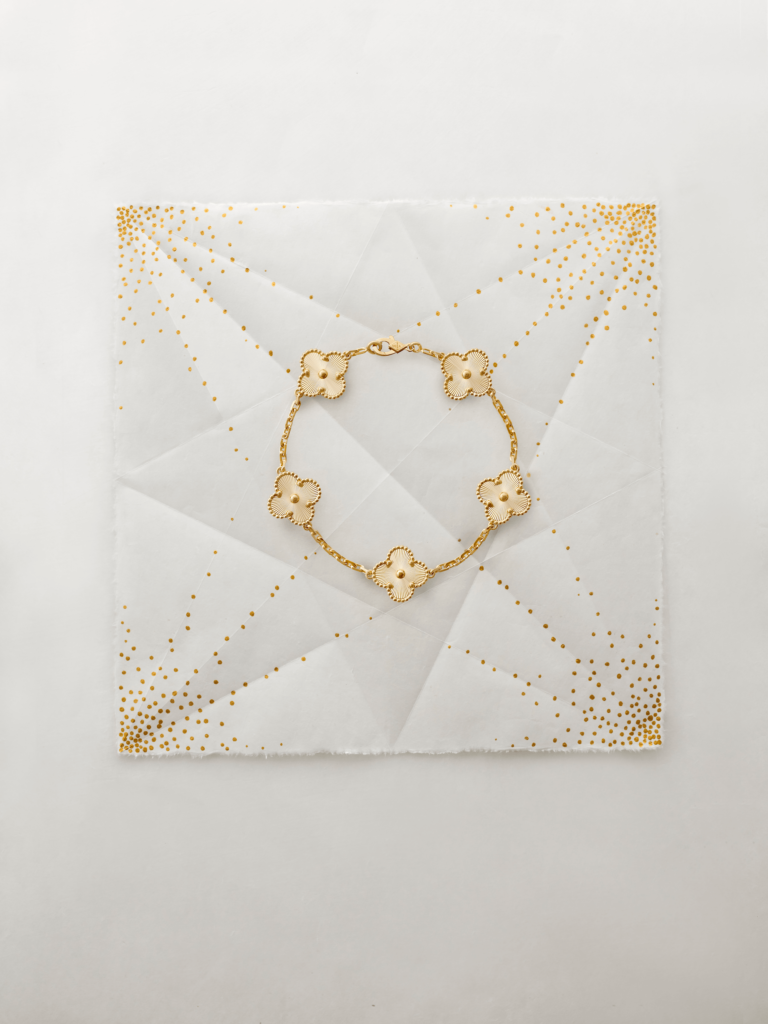 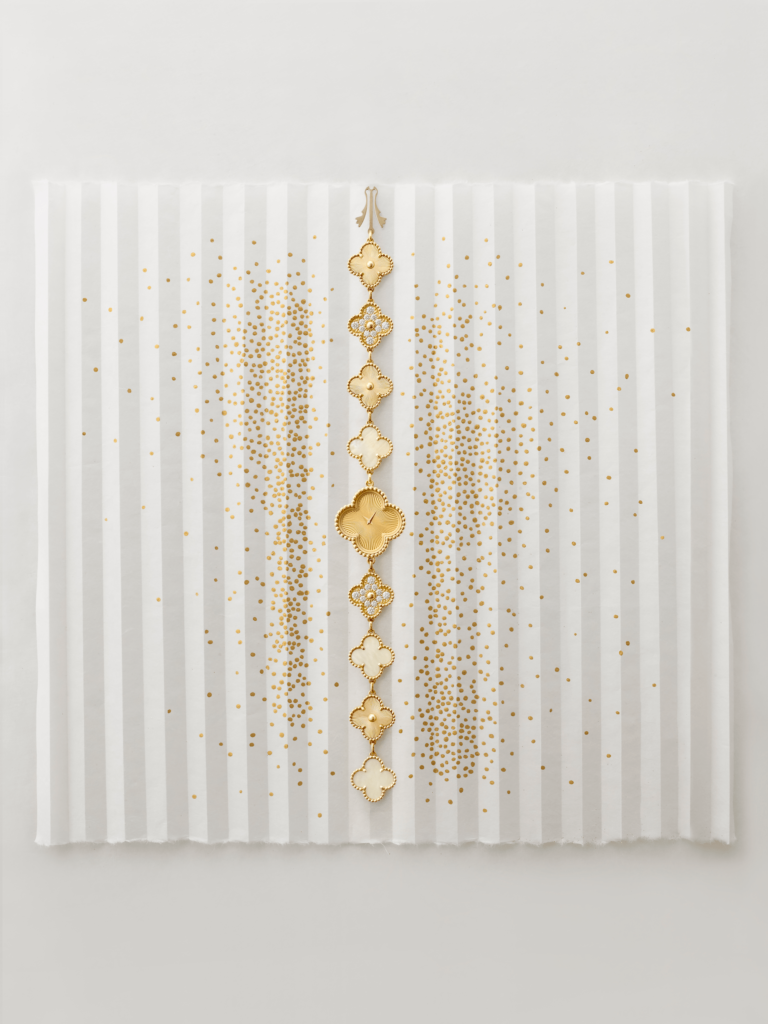 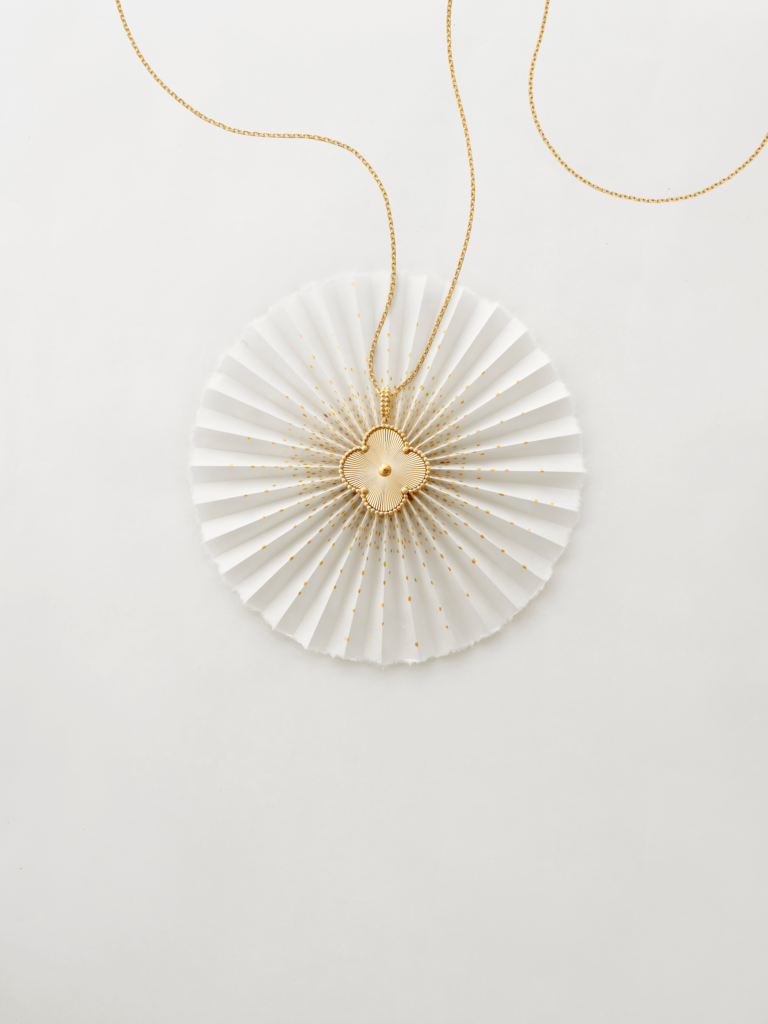 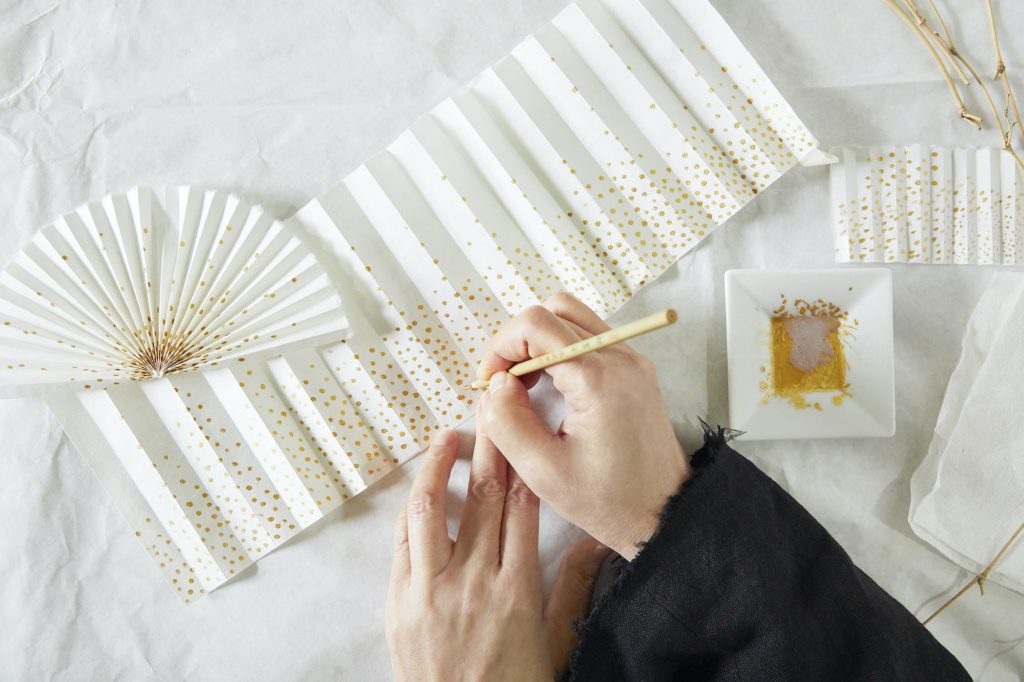 For the first time within the Alhambra collection, the maison introduced the traditional engraving method of guilloché in 2018. This technique was used to adorn watch dials in the 1910s, followed by boxes, powder compacts and minaudières in the 1930s. Thanks to Van Cleef & Arpels’ expertise, the depth of the incisions and their sunburst pattern endow the surface with a subtle relief effect, causing light to emanate intensely. In Suh’s interpretation, the guilloché décor – with its distinct and uniform lines on the surface of the Alhambra pendants – resemble the sun’s rays.

“For this series on guilloché, I was inspired by the monochromatic style art that is trendy in Korea. Artist, Lee Ufan, a master of this art, is known for using countless dots or dotted lines on hanji.  Symbolising the relationship between space and time, these motifs reminded me of the guilloché pattern. The Maison’s guilloché technique creates uniform lines with exact repetitive spacing between them, highlighting the elegant flow of light reflection, just like rays of sunlight. I also used hanji paper for the decor, like many monochromatic artists, along with the clustered and scattered dots to complete the pattern. It expresses the splendid radiance of the guilloché Alhambra creations,” Suh elaborates. 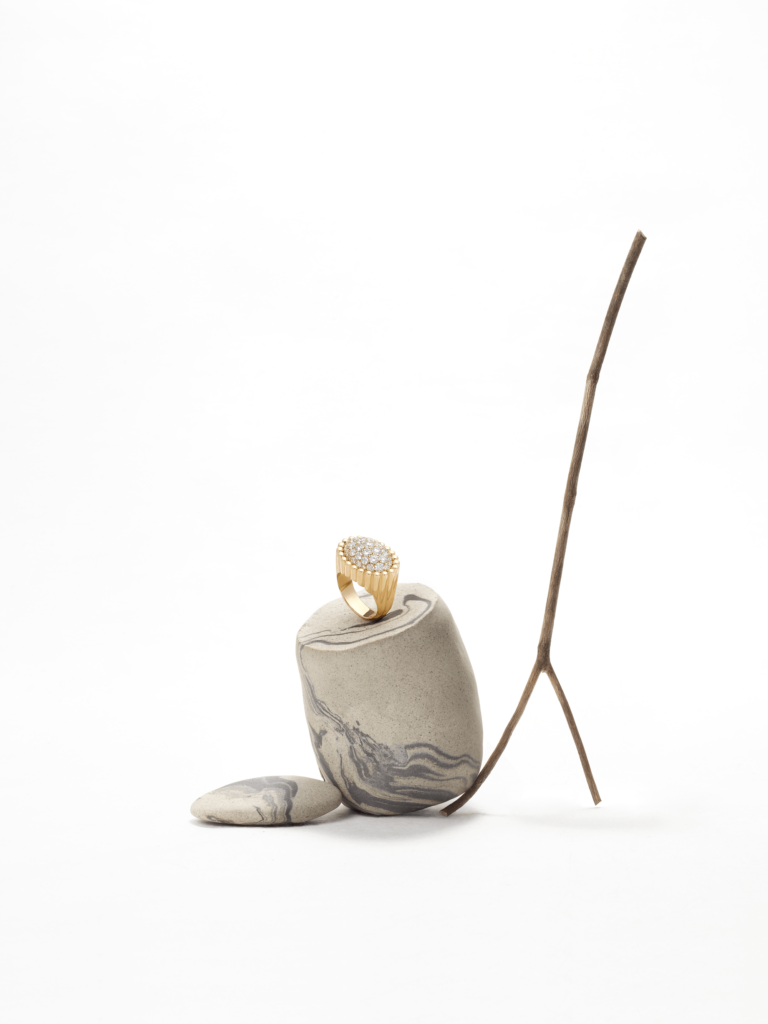 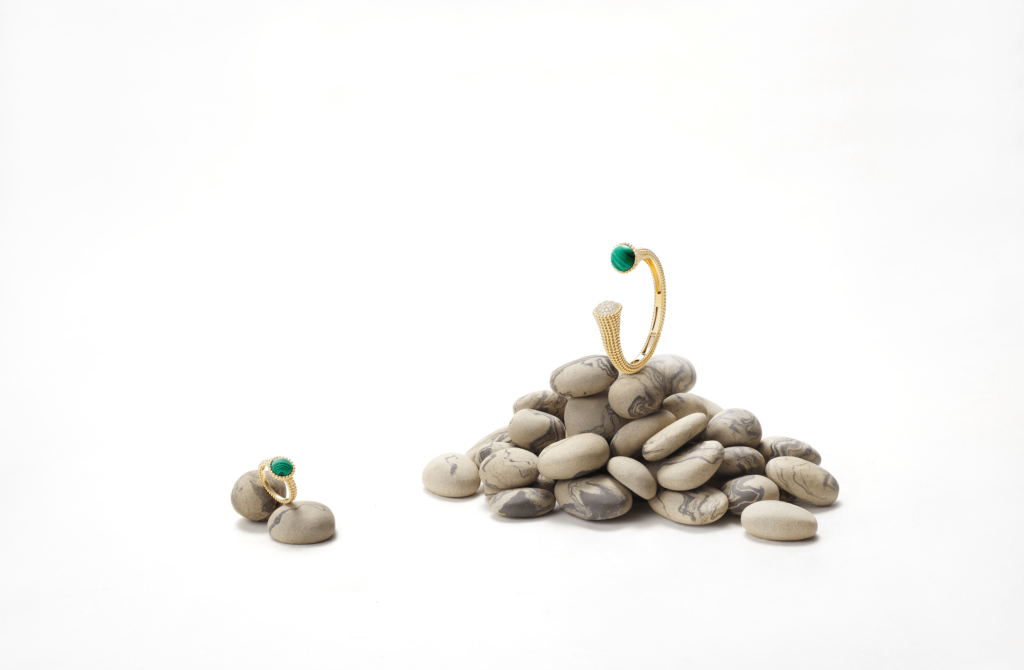 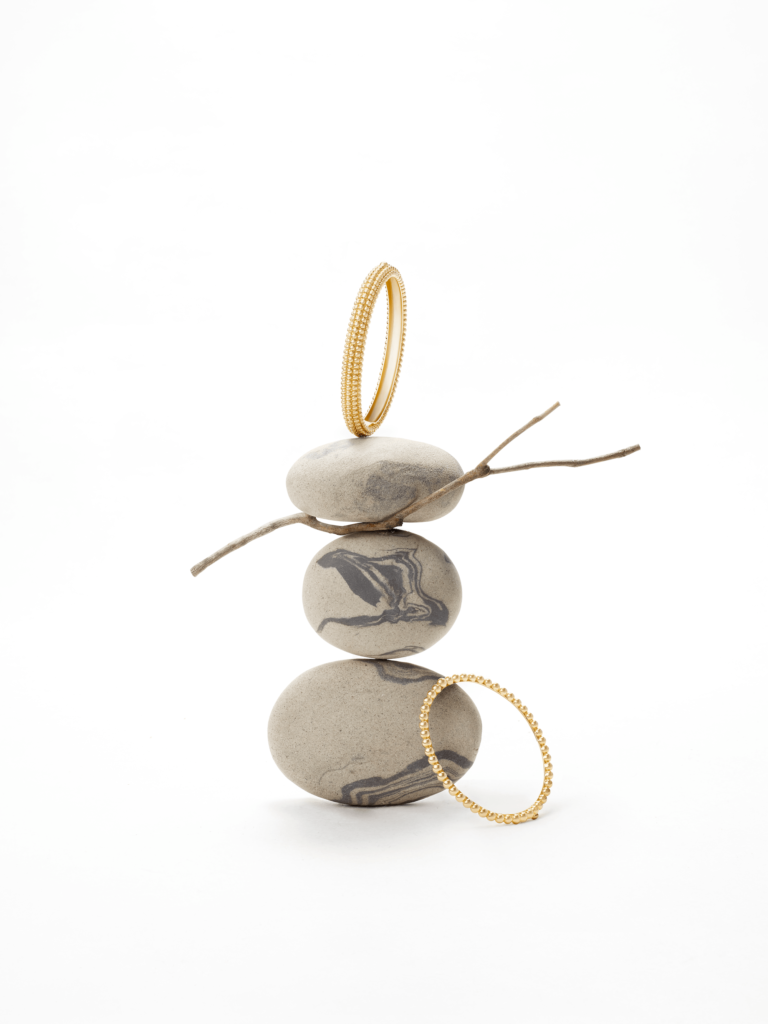 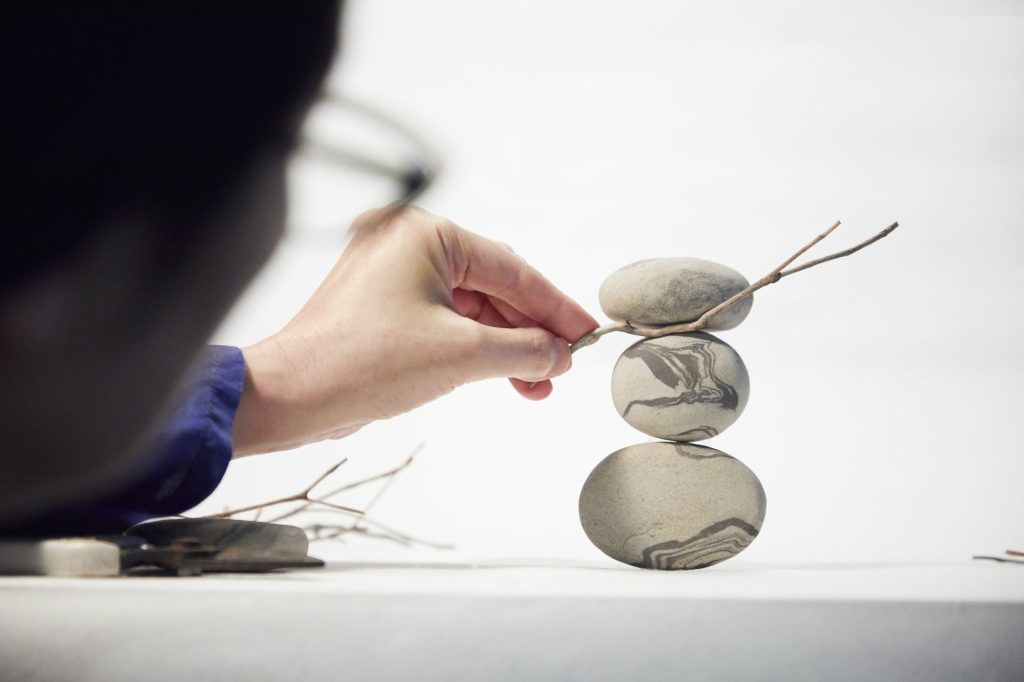 Part of Van Cleef & Arpels’ heritage since the ’20s, golden beads have lent softness and lustre to the house’s creations. From the late 1940s, beads of yellow gold took on multiple forms on necklaces, earrings, bracelets and watches in the Couscous collection. While Twist jewellery pieces from the ’60s offered a graceful combination of golden and hard stone or coral beads, Alhambra creations flaunted an elegant beaded border. In 2008, these same beads inspired the spirited and feminine aesthetic of the Perlée collection that has become emblematic of the maison. Suh chose to use ordinary pebbles, rocks and natural objects and transformed them into precious décor elements that echo the curves of Perlée’s golden beads.

“Last summer, I went to the pebbled shores of Mongdol Beach on Geojedo Island, Korea. Each small pebble twinkled like gold beads when waves washed over them, reflecting the splendour of the setting sun. This is what the Perlée collection instantly reminded me of. Pebbles and rocks are popular materials among Asian artists, probably because they seem serene. For these photographs, I was influenced by Park Hyunki’s artwork. This Korean video artist scattered pebbles in his Mandala series and even built pebble towers in other works. I drew inspiration from his artworks and decided to place Perlée creations on top of these seemingly calm pebbles. The golden beads, with their perfect curves and brilliance, contrast with the small pebbles created by Mother Nature, but they also cohabit with them. This is a relationship worth celebrating,” explains Suh.