In news sure to annoy some of Michael Jordan’s most diehard fans, there is at least one area where LeBron James’s supremacy over His Airness can’t be questioned.

On Monday, PWCC Marketplace announced that it had brokered the private sale of the Laker star’s autographed rookie card for a stunning $5.2 million. The remarkable sale doesn’t just make the card the most expensive basketball card of all time, it also ties it with Mickey Mantle’s rookie card as the most valuable sports card ever.

The card in question is a 2003-04 Upper Deck Exquisite Collection RPA (rookie patch autograph) Parallel card numbered out of 23. It was given an overall 9 grade by Beckett Grading Services, while its signature is a perfect 10, making it the third best example in existence, according to ESPN. A 9.5 grade example sold for $1.85 million last July, briefly making it the most expensive basketball card of all time.

“At the heart of every collector in 2003, was the hope of pulling the ultra-rare Lebron James Rookie Patch Auto Parallel numbered to 23 copies,” PWCC wrote on Instagram. “With so few ever becoming available and demand increasing by the day, this card is quickly becoming the crown jewel of all sports card investing.” 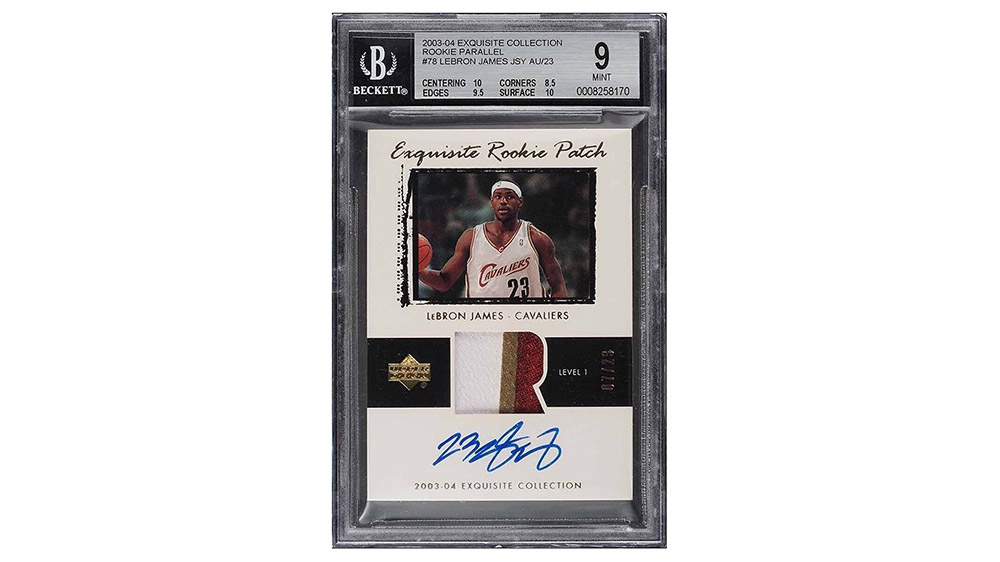 The autographed James rookie may be tied with Mantle’s legendary 1952 Topps rookie card as the highest-priced sports card of all time, but it is alone as the most expensive basketball card ever sold. The sale easily bested the $4.6 million Luka Doncic 2018-19 National Treasures Auto Logoman card that sold last month. And LeBron’s card trounced a Giannis Antetokounmpo 2013-14 Auto Logoman Patch rookie card that sold for $1.86 million in September.

Prices for trading cards have increased exponentially in the last year, with jaw-dropping records lasting for only a few months at a time. In August, a one-of-a-kind, autographed Mike Trout rookie card sold for $3.94 million, comfortably beating the previous record holder, a $3.12 million T206 Honus Wagner that sold for in October 2016. That record would stand until this January, when one of the five grade 9 Mickey Mantle rookie cards in existence sold for $5.2 million.

While King James supporters will be thrilled to know their idol’s rookie card is a record holder, we suspect they’ll take extra pleasure in the whopping $3.8 million gap between LeBron’s card and Michael Jordan’s most expensive card, a $1.4 million autographed, game-worn jersey fragment card. It appears that there’s at least one universe where James wins the GOAT debate.