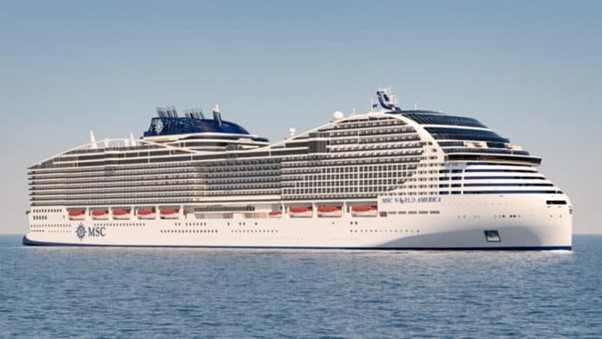 MSC World America will be the name given to the next ship, which will be deployed in North America.

The new ship’s name is MSC World America, and the announcement reveals not only what the ship’s name will be but also where the ship will be stationed and what market it will serve.

“MSC World America is a testament to our ambitious growth plans in the United States and the Caribbean, and it further solidifies MSC Cruises as a major player in the North American market with another of our largest, most glamorous ships coming to the region,” said Rubén A. Rodriguez, President, MSC Cruises USA.

This news comes only two weeks after MSC Cruises announced its largest deployment from North American homeports, underscoring the cruise line’s commitment to the region.

MSC Cruises was created in 1989 and is an Italian-based cruise line that has primarily served the European market, with only minor deployments in other regions. These global deployments have increased in recent years, as has the cruise line’s reputation for excellence in the complete cruise experience.

The announcement comes as the first steel for the ship’s hull is cut, marking the start of the vessel’s physical construction. The occasion took place at the shipyard Chantiers de l’Atlantique in western France, where the ship will be built.

MSC World America will be just as beautiful as MSC World Europa, the cruise line’s newest flagship, which was just delivered from the shipyard to MSC Cruises and is set for deployment in the Mediterranean following her first winter season sailing in the Arabian Gulf region.

MSC World Europa will enter service in December 2022, following the completion of her sea trials and final outfitting details.

MSC World America is expected to enter service in 2025 as the second of two World-class sister ships, with two more on order.

She will be MSC Cruises’ regional flagship in North America. While her itineraries have yet to be revealed, MSC World America will undoubtedly visit a range of popular ports, most likely in the Caribbean, Mexico, New England, and more.

“The ship will continue to enrich our guest experience in the Caribbean, and we look forwards to raising the bar on what travellers may expect, whether they’re faithful cruisers or taking their first vacation at sea,” added Rodriguez.

While MSC World America will be highly similar in design to her sister ship, MSC World Europa, the ship will be specifically tailored to satisfy the needs and expectations of North American cruisers throughout its 22 decks, more than 2,600 staterooms, and 420,000 square feet of public space.

Furthermore, the ship will use the same sustainable technologies that the cruise company is incorporating in all of its new ships, assuring environmentally responsible operation in keeping with the cruise line’s long-term aim of achieving nett zero emissions for its operations by 2050.

“In addition to providing a cutting-edge cruise experience, MSC World America displays our commitment to sustainability with its superior environmental technologies,” added Rodriguez.

The ship will be powered by liquefied natural gas (LNG), the cleanest fuel for modern cruise ships. It will likely include more efficient onboard fuel cells as well as advanced air conditioning systems, LED lighting, and advanced energy monitoring systems for better efficiency, all to help ensure responsible and sustainable operation to protect the environments where the ship operates.