Few names get car people going as much as Alfa Romeo. The Italian carmaker has a storied history and has created some of the most advanced and amazing machines ever conceived. Cars like the legendary Alfa Romeo 6C and 8C, the beautiful Giulia and Giulietta, the wild Bertone B.A.T. cars… the list is truly endless. Relying on prolific design ateliers such as Bertone, Giugiaro and Pininfarina, today’s very special Alfa Romeo comes from the house of Zagato. This one-off beauty is based on the Giulia, Alfa’s 5-door saloon car but is transformed into a sumptuous sporty coupe that packs a mighty punch. 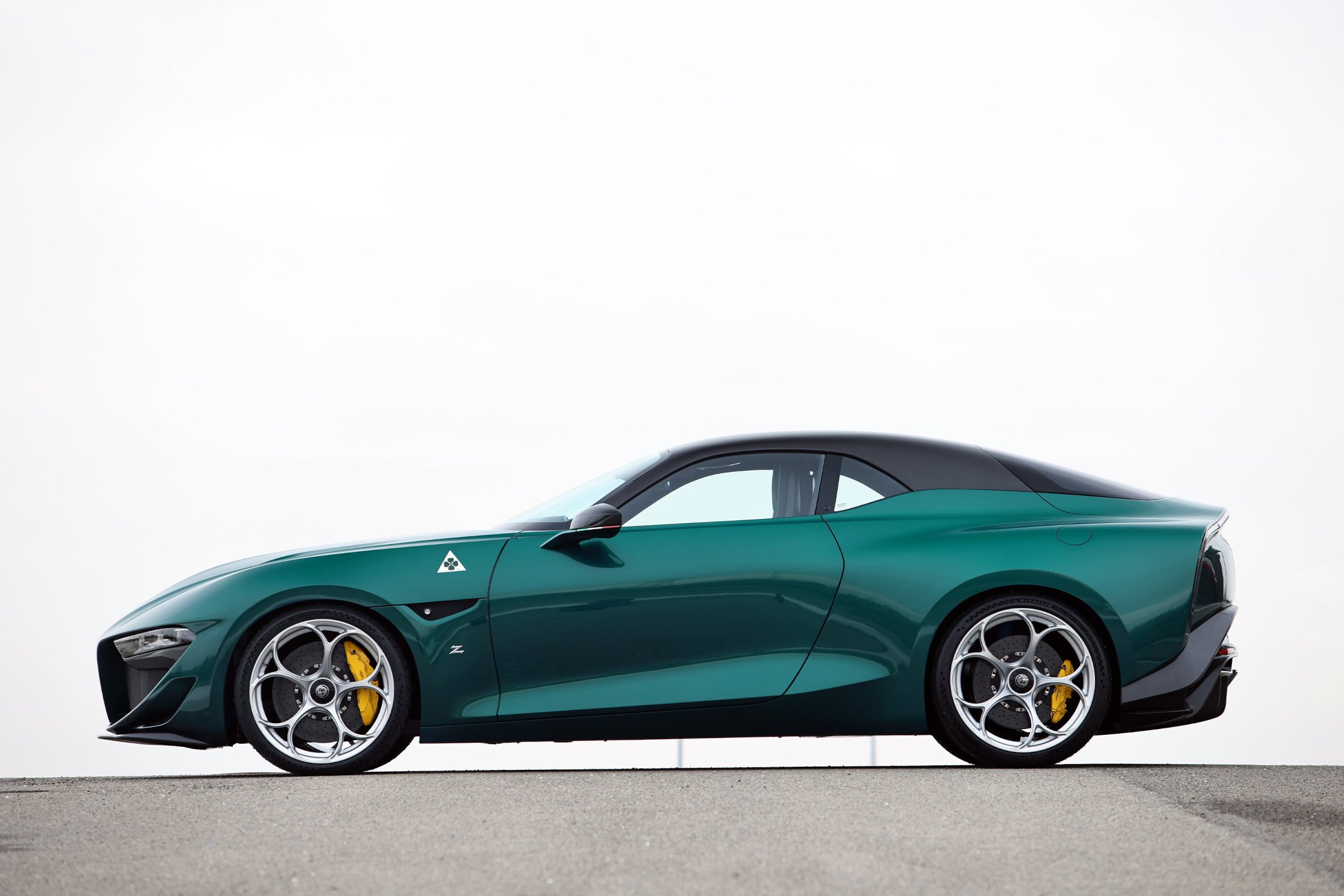 The history between the Milanaise design firm of Zagato, and the Turin-based car manufacturer Alfa Romeo goes back a little over a century. The first ever car built in collaboration between the two was the 1921 Alfa Romeo G1 Corsa Zagato, a two-seater race car of which only one is said to remain today. The Zagato name, however, comes from Ugo Zagato, who founded his eponymous coachbuilding company in 1919. Following his early work on the G1 Corsa Zagato, he was commissioned to design and construct a body for Alfa Romeo’s 6C 1500 which came in second in the 1927 Mille Miglia, and won it the year after. Its successor, the Alfa Romeo 6C 1750 would win again in 1929 and came in first through fourth in the 1930 edition.

Enzo Ferrari, no stranger to all of you I guess, founded the official Alfa Romeo racing team, known as Scuderia Ferrari in 1929. Enzo would work exclusively with Zagato for years, before finally venturing out on his own by creating the Ferrari brand we know today. The work by Zagato can be roughly categorised per decade, as the designs evolved over the years through lessons learned in the past. The 1930s are identified as the Aerodynamic era, where Zagato would design and build a whole range of race cars for several different manufacturers using early aerodynamic technology and materials. The cars often proved dominant, racking up 8 Mille Miglia, 4 Targa Florio and 4 Le Mans wins to name just but a few.

Next to Zagato’s work for Alfa Romeo, he would also design and build cars for Bugatti, Fiat, Lancia, Maserati and even Rolls-Royce. In later years, manufacturers like Ferrari, Porsche and Aston Martin would also enlist the company’s expertise. Zagato would always have a close relationship with the Turinian car manufacturer though, which continues to this day as evidenced by this green-bodied Giulia SWB Zagato.

It’s difficult to name just one signature element in more than 100 years of Zagato-bodied cars, but there are some elements that are shared between cars from various eras. Some of the most iconic cars by Zagato and the inspiration for the Giulia SWB Zagato, are the Giulia TZ and TZ2 cars from the 1960s, and more recently the TZ3 Corsa and Stradale from 2010. The TZ designation in each of these cars stands for Tubolare Zagato, basically indicating a car with a tubular spaceframe chassis built by Zagato.

The 1962 Alfa Romeo Giulia TZ was a compact, lightweight sports car with the intent to go racing. The small and nimble car featured a swooping body with a typical long (relative to the car’s length) front, and a cut-off rear section (the Coda Tronca, or short tail). Weighing in at just 650 kilos, it was powered by a 1,570cc four-cylinder engine lifted from the Giulia. With just 160 horsepower in racing trim, the little car could hit a top speed of well over 200kph. It would be a very capable racing car, racking up multiple class wins wherever it turned up on the starting grid.

The success of the initial Giulia TZ was followed by the Alfa Romeo Giulia TZ2 built in 1964, which improved the concept of the TZ even more. The lightweight aluminium body of the TZ was replaced with an even more aerodynamic body made of fibreglass. The weight was cut down to 620 kilos, with the power up to 170kph. This combination of a streamlined body, low weight and increased power pushed the TZ2 to a top speed of 245kph. It took class wins in the 12 Hours of Sebring, 1000km of Monza, the Targa Florio, the 1000km of the Nürburgring and many others.

A more recent icon in Zagato’s longstanding history with Alfa Romeo are the SZ and RZ sports cars. Built between 1989 and 1991, the Alfa Romeo SZ (for Spring Zagato) and RZ (for Roadster Zagato) are real love-it-or-hate-it designs. The coupe version is affectionately named Il Mostro, the Monster, for obvious reasons. Personally, I love the SZ for its unconventional brutalist design with six headlights, a glass bubble roof and the straight cut-off rear body. Even today it looks like nothing else on the road. 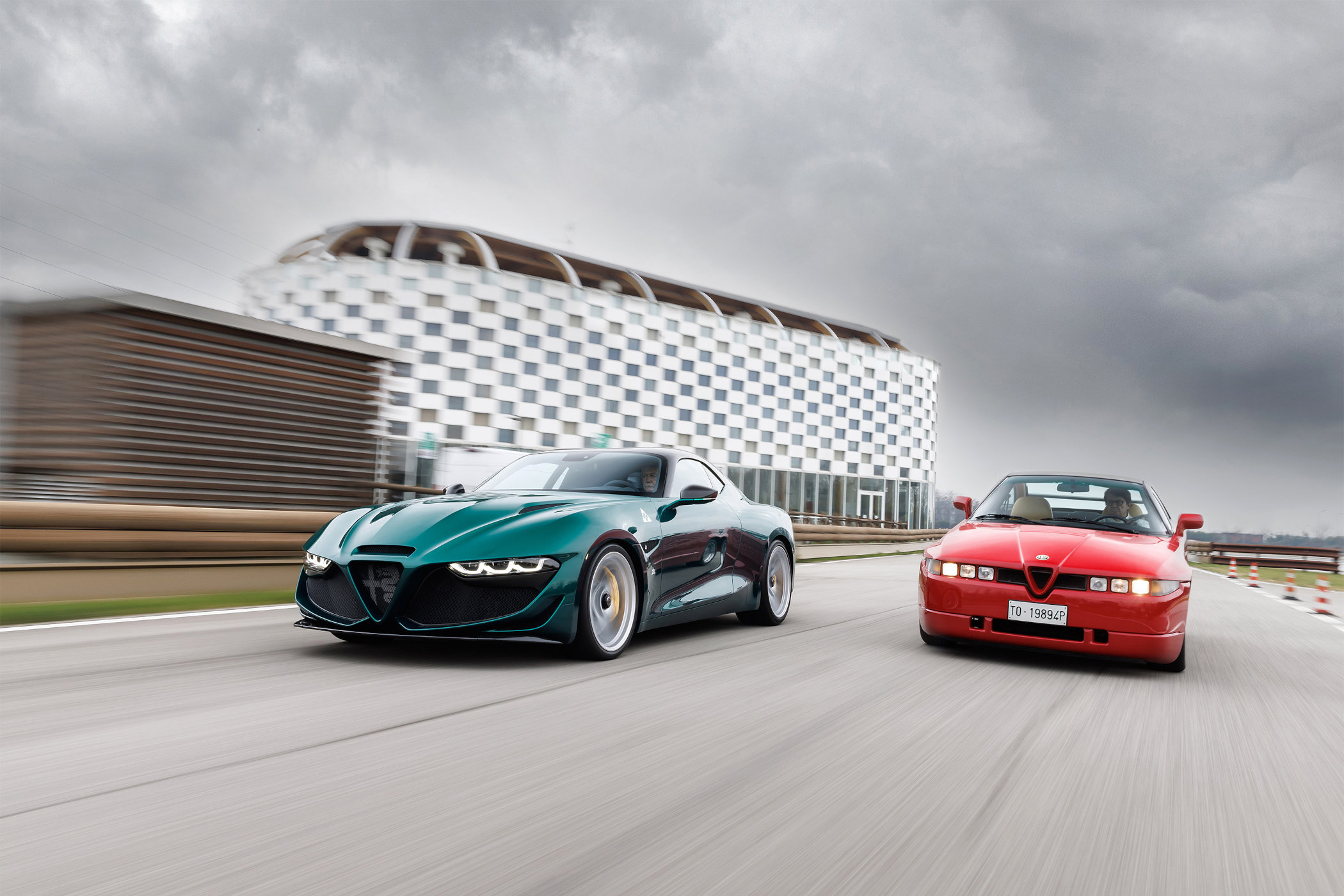 Zagato was also commissioned to build a pair of cars to celebrate Alfa Romeo’s centennial anniversary back in 2010. The result was the Alfa Romeo TZ3 Corsa and TZ3 Stradale. Both take their looks from the TZ2, but are very different in execution. One is a lightweight racing car with a 4.2 litre V8, and the other is a Grand Tourer based on the chassis and engine of the Dodge Viper (Alfa Romeo is owned by Fiat since 2017 and part of the Fiat-Chrysler concern ever since, now known as Stellantis).

From Giulia to Giulia SWB Zagato

With all this history between the two companies, it’s only logical to celebrate momentous occasions. The project that would celebrate the 100-year bond between Zagato and Alfa Romeo would be green-lit in 2021 and was finally revealed a couple of weeks ago. It’s called the Alfa Romeo Giulia SWB Zagato, which should ring immediate bells. It is basically a gorgeous greatest-hits ensemble of some of Zagato’s historic styling cues built into a modern-day performance coupe. 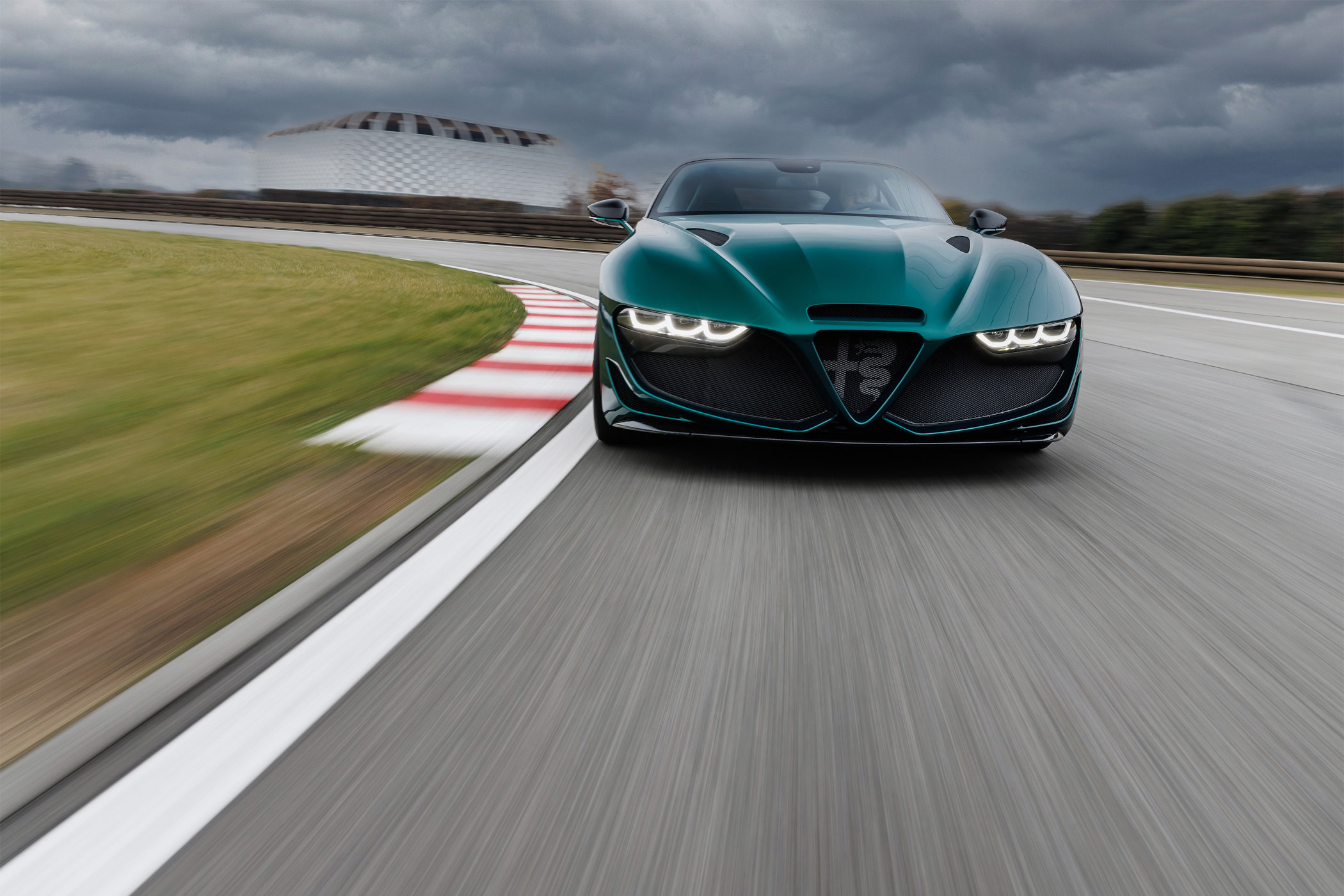 Built upon the backbone of the Giulia, Alfa’s very good-looking 5-door saloon car, the Giulia SWB Zagato looks amazing judging from the pictures. Finished in a deep green metallic paint job, we can identify several elements from past cars. We see a poised front end with the signature triangular-shaped Alfa Romeo grill. We see the double buddle roofline, with a curvature that extends into the rear section. We see the short tail ‘Coda Tronca’ style rear end, and so on. There’s even a nod to the boxy Alfa Romeo SZ here or there, for instance in the LED headlights and the V-shaped lines coming off the grill and onto the bonnet. 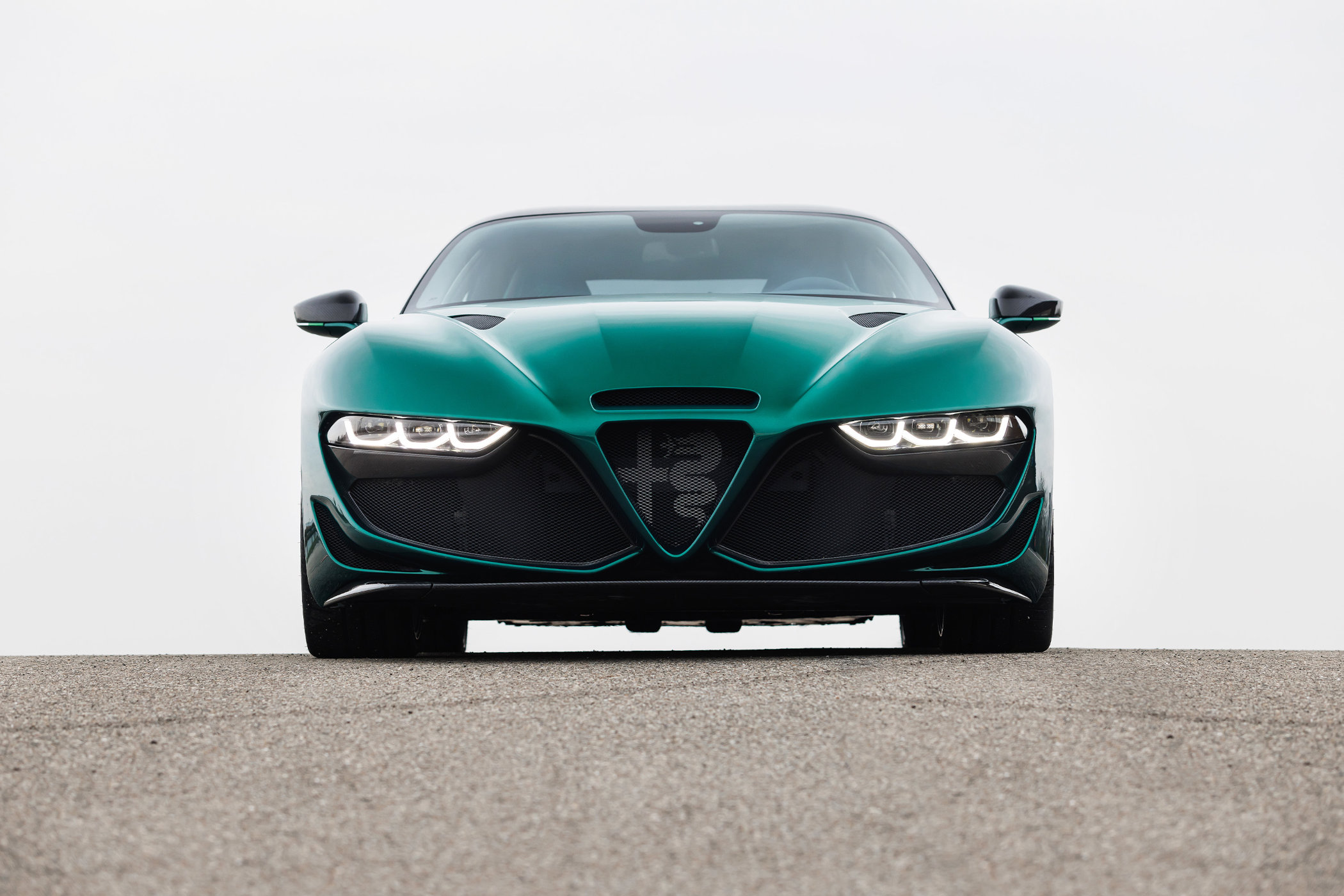 Alfa Romeo refers to the design of the Giulia SWB Zagato as a natural evolution of the style originated by the early 1960s sports and race cars with the Coda Tronca designs. The entire body is constructed out of carbon fibre which keeps the weight down as much as possible. It’s built upon the modular floorplan of the current Alfa Romeo Giulia and Stelvio and uses the engine from the bonkers Giulia GTAm. That means it packs a 533bhp 2.9-litre twin-turbo V6, which is mated to a six-speed manual gearbox. Around the back, there is a big diffuser and centrally mounted twin exhausts. The car’s inside is finished in black and green leather, combined with carbon fibre trim panels.

Alfa Romeo and Zagato do not communicate the car’s performance figures, but it will no doubt be a fast-moving machine with that much power available. There’s also no word on what this one-off would cost but you can bet it will be very expensive. The car is said to be delivered to an avid Alfa Romeo collector in Germany. One thing I do hope, however, is that this gorgeous-looking coupe doesn’t end up being a garage queen and gets driven from time to time!