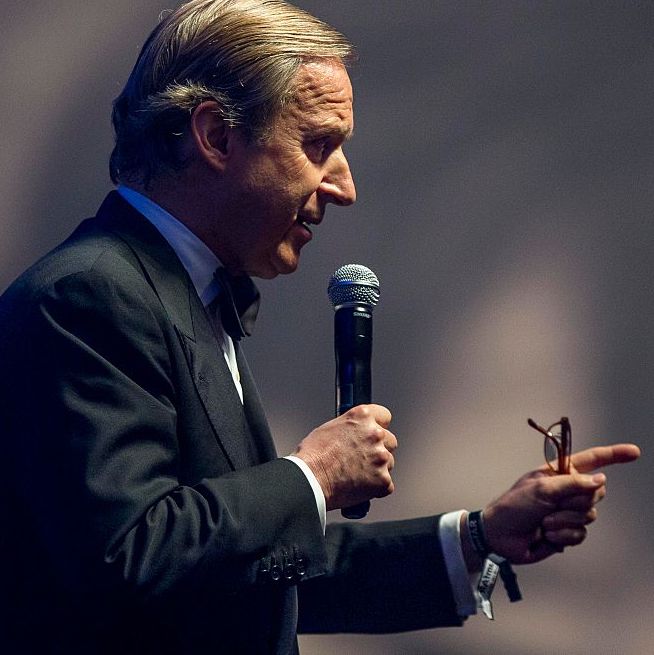 Renowned auctioneer, curator, collector and art advisor Simon De Pury has recently lent his talent to curate the art for the towers of the Waldorf Astoria in New York, now undergoing a massive renovation. We ask him how he chose artworks for the landmark property and his views on the art industry during the Covid-19 pandemic.

Simon de Pury is dynamic, even over Skype from his home in Monaco. It’s obvious how passionate and animated he is about his career, with an energetic and entertaining style at the podium that’s earned him the moniker “the Mick Jagger of auctions”. Having re-founded Phillips, one of the world’s leading art auction houses, de Pury is a leading fugure in the global art industry. Since selling his stake in the firm, he’s worn many hats, including leading a large number of charity auctions.

“I feel very, very privileged being active in the art world, because this has been one of my main passions and interests since I was a teenager,” he says. “I feel it’s a privilege to be doing professionally what you enjoy most.”

Despite his achievements and fame, de Pury is humble and very friendly. Like everyone else, Covid-19 has drastically impacted his career. “In 2019, I conducted 36 charity auctions around the world. In 2020, since the pandemic started I’ve only conducted four. I do most of my work over the phone with artists, collectors and clients. I’ve found you can even curate exhibitions without having to travel all the time.”

Because de Pury previously travelled so much – “I spent a third of my time in London, another third in New York and the rest travelling around the globe” – his client base is international. It certainly helps that he’s fluent in English, French, German and Italian.

Given how badly art fairs have been impacted by Covid-19, I ask whether or
not he sees online showrooms as the future of art fairs. “It’s extraordinary to see how rapidly the market has switched to being mostly online. In the auction world, you see the main auctions now being conducted entirely online, with people seeing the auctioneer live on screen. And they’ve been very, very successful. It’s been more problematic with art fairs, with literally all of them being cancelled since the start of the pandemic. And so yes, you spend a lot of time attending shows online.

“There’s a danger that it can induce a kind of digital fatigue, because you’re constantly bombarded from galleries, asking you to attend this showroom and or that showroom. And even if you’re a very active collector – or, in my case, a professional – you’re not going to devote all of your time just visiting showrooms. That is the main challenge for galleries, to try and get the attention of their top clients in this digital world.”

“Everyone has personal preferences and affinities, and there are things that, for whatever reason, don’t appeal to us – and there’s no point trying to impose on people something that won’t appeal to them,” he says. “I first like to go with potential clients to an art fair or to go just to look at art books, to get a feel of what makes them tick. When I understand better what excites them personally, then I try within what excites them to define works or find works of particular quality that would be of particular interest – and, of course, that have potential growth in market terms. Because once you start spending money and buying art, you want to make sure that this money is wisely spent. Even the most passionate and purist collectors want to make sure that they don’t just throw the money out the window.”

The owners of the Waldorf Astoria approached de Pury to help curate the art for the property’s renovation, which is due to be completed by 2022. Having spent a lot of time in hotels during his career, de Pury understands how important their interior environments are to guests and residents.

“Often in hotels or in residential projects, they just put up bland corporate art, but I wanted to have artistic choices that are as valid as those that you would choose for your own homes,” he says. “I was very happy to help with this project, especially since I stayed at the Waldorf Astoria on my first trip to New York. And when I was curator of the Misa collection many years ago, the Baron Thyssen-Bornemisza – whose massive collection is housed in its own museum in Madrid – favoured the Waldorf Astoria as his go-to home in New York, and so that’s why I started staying there. I love New York. It’s an extraordinary city, because it’s where everything comes together. You have all countries, all nationalities, all cultures–it’s a great big melting pot.”

The art de Pury has chosen for the hotel reflects this sentiment through an eclectic collection of paintings and sculptures – a magnificent fountain sculpture has been chosen for lobby – to ceramics and glass works, with many more to be added along the way. “We have works by artists from Korea, Cuba, Switzerland, Canada, Britain and Africa,” he says.

“And then, of course, with a project of this magnitude, you have budgetary constraints, so you can’t just put together your ideal collection. There were some artists whom we felt would be hard to work with from a budgetary point of view, but the artists themselves viewed the Waldorf Astoria as a culturally important project, so they made some sacrifices and concessions regarding the acquisitions, and it was very gratifying to see that they’re all onboard with the concept of doing something exciting for the hotel and the city alike.”

Some of the artists de Pury has chosen – particularly Minjung Kim, whose career has taken off – have been vindicated by the marketplace, showing that de Pury’s eye is still as sharp as ever. De Pury, who made a cameo appearance in Netflix’s hit show Emily in Paris, shows no signs of slowing down. Aside from being a DJ – who’d have guessed? – and photographer, he identifies himself as a juggler, throwing a couple of ideas in the air to see which one he can catch and execute. When asked about future plans, he simply says, “I’m quite superstitious, I don’t like to talk about my future plans, but I can say for sure that I have a couple of ideas brewing.”

Given the drastic changes going on in the world, we can’t wait to see what the mercurial Simon de Pury has up his sleeve.

The post Renowned Auctioneer Simon de Pury on the Future of the Art World and His Emily in Paris Cameo appeared first on Prestige Online – Hong Kong.