Red — a colour associated with passion, strength, and courage — has had a long-standing significance for The Macallan.

It’s no coincidence that its founder Alexander Reid’s last name means the ‘the red one’ in Scots and was originally associated with red hair back in 1824. Less than a century later in 1903, The Macallan’s then owner, Roderick Kemp, chose red for the labels on the cases of The Macallan Choice Old range to distinguish them from the distillery’s existing whiskies, which were labelled in black.

Since then, the bold, scarlet hue always found its way back to the revered distillery, most notably in 1980 when it released its oldest vintages then. Dated 1938, 1940, and 1950, the highly sought-after bottlings were adorned with red ribbons to denote their age and value, a concept dreamt up by then chairman Allan Shiach.

Today, the distillery draws upon its heritage — and favourite colour — once again with The Red Collection, an exquisite range of distinguished and rare single malt Scotch whiskies that captures its deep respect for tradition and craftsmanship. The curated selection is anchored by The Macallan 40 Years Old, The Macallan 50 Years Old, and The Macallan 60 Years Old, easily some of the oldest ongoing expressions ever offered by the distillery.

Those in pursuit of the brand’s finest however, will find their attention more drawn towards the special high aged guest releases this special series has to offer. The Macallan 71 Years Old, The Macallan 74 Years Old, and The Macallan 78 Years Old are incredibly rare single malts, not to mention the oldest bottlings ever released in its history.

To match their exceptional prestige are exquisite presentation boxes that have been fashioned from the same European oak that makes the label’s casks. Each are then upholstered with sustainably sourced soft red leather from Bridge of Weir Leather, a Scottish supplier well-versed in the art of luxury car finishings around the world.

Another equally bold and commendable move from the brand is the fact that each of the ongoing releases in the collection has been signed by Kirsteen Campbell, who has been Master Whisky Maker at The Macallan since 2019, and is the first woman to occupy the role in the history of the brand. The initial guest releases have been signed by the brand’s Lead Whisky Maker, Sarah Burgess.

With such rarity comes the certainty that you’ll almost never find all six expressions together in the same room, much less see them in the flesh. The complete set, however, is now exclusively showcased at The Macallan Experience at the Raffles Arcade, which has been extended for an additional three months until 9 May 2021. The multi-sensorial pop-up will see individual bottles from The Red Collection available for purchase. 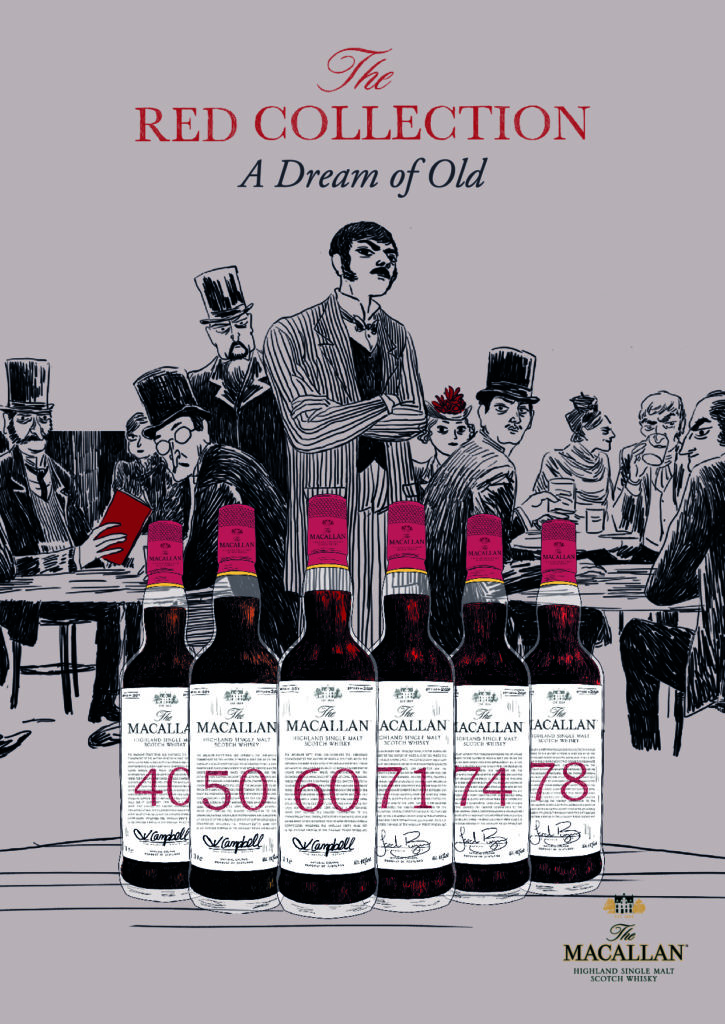 The distillery’s penchant for storytelling continues with an animated film specially created for the collection. The collaboration with Spanish painter and illustrator Javi Aznarez — whose striking graphic creations have found their way onto Hollywood films and most recently, in Wes Anderson’s upcoming feature The French Dispatch — tells the tale of the brand’s affinity with the colour red by following the journeys of Reid, Kemp, and Shiach.

The artist’s specially commissioned set of The Macallan Red Collection — of which he illustrated and signed — was also recently sold at a global auction with Sotheby’s for £756,400 (S$1.39 million).

“Created from some of the world’s oldest and rarest casks it is an incredible privilege to have crafted The Red Collection, the pinnacle of The Macallan’s portfolio,” said Campbell.

“Each precious drop offers a unique opportunity to explore The Macallan’s whisky making legacy. The incredible elegance and rich flavours of the expressions that form The Red Collection are a direct result of the craftsmanship, knowledge and skills nurtured by our master whisky makers, past and present.”

Reserve your tickets to The Macallan Experience here, and find out more about The Macallan Red Collection here.