In what’s become a highly anticipated annual tradition at Harry Winston, in which it unveils a unique and extraordinary timepiece that’s almost always ridiculously extravagant, magnificently crafted and, quite simply, a sight to behold, the New York house presents the Ultimate Quadri Tourbillon.

For this piece, its designers envision the grand, neoclassical arched entrance of the brand’s Fifth Avenue home and creates a structure from which hangs a white gold pocket watch adapted from Harry Winston’s Histoire de Tourbillon 10, featuring four independent tourbillons. The watch provides quite the mesmerising show in which the tourbillons rotate counter-clockwise over 36 seconds, while the hours and minutes advance in a traditional fashion. The aesthetics of the watch have been enhanced, with the tourbillons now fitted with blue titanium bridges, and the movement has an openwork structure that reveals its complex architecture.

Providing texture and depth, the bridges and plates are treated with a microbead-blasted finishing that contrasts with others that are satin brushed. Arabic numerals at 3, 6 and 9 o’clock are also presented in a lighter shade of blue and placed in raised platforms, while the famous Harry Winston emerald-cut diamond is given pride of place at 12 o’clock. 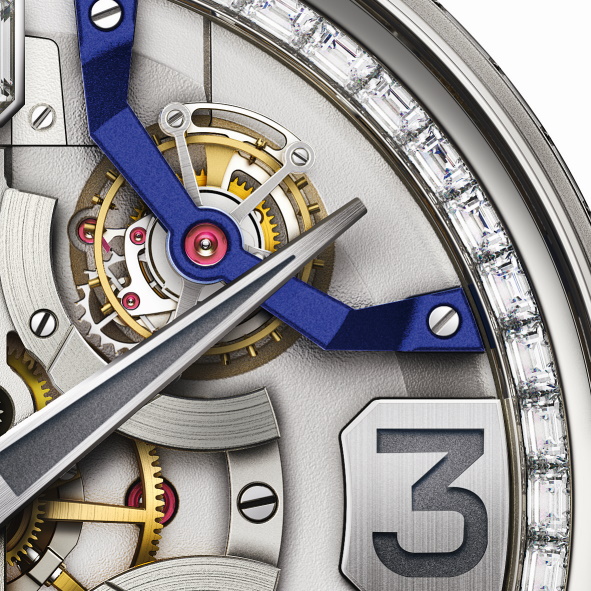 The Ultimate Quadri Tourbillon hangs from a free-standing structure made in white gold that echoes the entryway to the house’s Fifth Avenue salon and features a marquetry of blue aventurine and 18 baguette-cut diamonds in the keystone.

The post This Harry Winston Objet d’Art is a triumph of design and technique appeared first on Prestige Online – Singapore.