We Slept on the Most Luxurious, High-End Sheets on the Market. Here Are the 10 You Should Get.

Like many people, I often complain that I don’t get enough sleep. And by now I’ve exhausted the usual aids, like melatonin and ambient nose machines, but not much has helped me improve upon my six-hours-a-night-at-most regimen. Throughout all of this trial and error, I stuck with the same cotton sheets that I bought for myself freshman year of college—which is to say they’re very old and not very good. So when the idea of an in-depth review of the best luxury bedding was being kicked around at Robb Report, I was eager to give it a go. Maybe, just maybe, my old Urban Outfitters set really was the problem after all.

What did I find? Sadly, even high-end sheets aren’t a silver bullet for insomnia. They can, however, entice you into crawling into bed in the first place—and, if you’re like me, that can be a bit of a struggle. (There are a million other really not-that-important things to do instead of sleeping, after all.)

If you’re ready to plunge into the world of high-end sheets we tested, keep scrolling to find our recommendations. But if you’re curious about my considerations, methods and testing, here’s everything you need to know before buying your own set of luxury bed sheets.

Thread Count: When Does It Matter?

By definition, it seems a fairly straightforward concept: It’s the number of threads woven into a square inch of fabric. But there’s a lot of debate here. What’s considered a good thread count, or, better yet, a great one? Is a higher necessarily better? Truth is, it’s not an exact science. Luxury bedding brands—and even brands that aren’t that luxurious at all—will often tout their extremely high counts as a way to statistically one-up each other. The truth is, good sheets have as much to do with overall material quality as the number of yarns crammed into one scrap of cloth. Depending on your preference, a 400-count set may be superior to a 600-count one, simply because of the textiles involved.

Materials: Percale, Sateen, and the Rest

And there are a lot of different material options to choose from. Percale sheets, for example, have an undeniably crisp feel to them, and some people find them cooler than others. Sateen is in some ways the opposite, and is often the most synonymous with luxury bedding, as it feels silky to the touch. Linen is among the most breathable of the bunch—it’s a favorite in the summer months for this reason, plus, it’s naturally temperature regulating, so it can double as a winter bedding option as well. I also gave a cashmere set a try—which, despite the inherent appeal of its name, only features a small amount of cashmere in its largely cotton weave. Another set I tried mostly out of sheer curiosity was one made with plant fibers. Many brands specializing in these have big sustainability pledges about how their materials require less water and energy to stitch together than cotton, so I wanted to see if they felt good to sleep on too.

How I Reviewed Each Set

After pulling together a wide range of different materials and thread counts, I washed all of the sheets according to the instructions on their care labels. I then slept on each set for at least three nights—often longer if I really liked them and found that they helped with my long-standing sleep problem. Here’s how they stacked up.

The editors of Robb Report scour the globe (and the Internet) for the best of the best and only endorse products we love—and think you’ll love, too. If you purchase a product or service through a link in this story, we may receive a small commission. 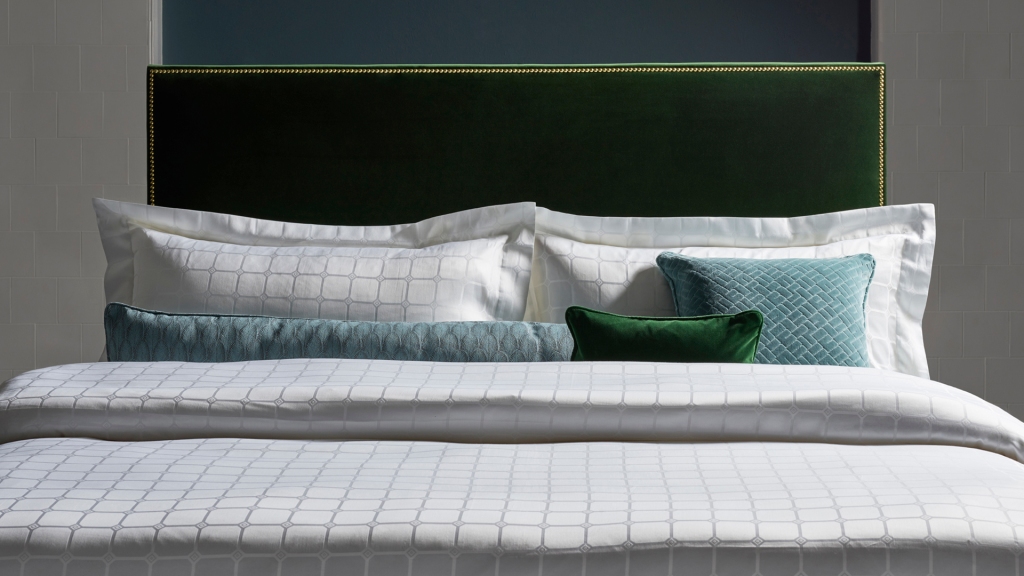 These were the sheets that I was most excited to try, and they didn’t disappoint. In terms of numbers, they’re 600-thread count sheets (hence the name) made of a jacquard weave, a signature of the British brand that’s specially dyed to give the fabric a softer feel and brighter color. To me they felt like a perfect hybrid between percale, which is sometimes so crisp it’s papery, and sateen, which I sometimes found felt more slippery than cozy. On top of all that, the patterns that run along the fabric give it a look that stands out a bit more than most other white sheets out there. 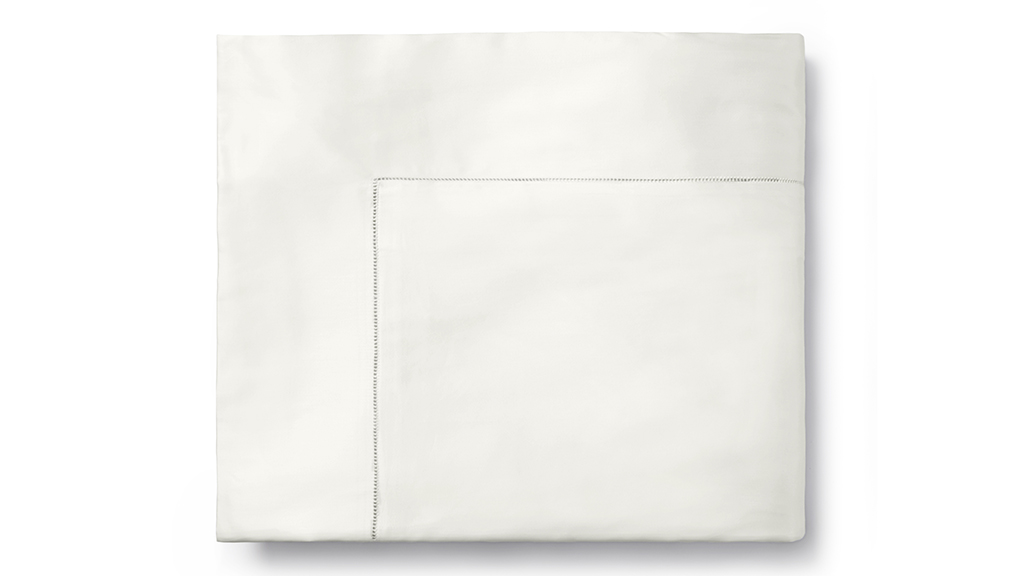 Sferra’s sheets were the best sateen sheets I tried and probably my second favorite set overall. I spent more than my allotted three days with these, admittedly, and somehow that still wasn’t really long enough. They’re super plush and silky smooth to the touch, but without feeling so precious that you won’t want to sleep on them seven days a week. The brand isn’t a big believer in thread counts, instead encouraging the consumer to “lose count” and focus on other factors, like materials and weaving techniques. It helps that theirs are some of the best on the market, then: the Giza 45s are made of 100 percent Egyptian cotton and woven by master craftsmen in Italy. 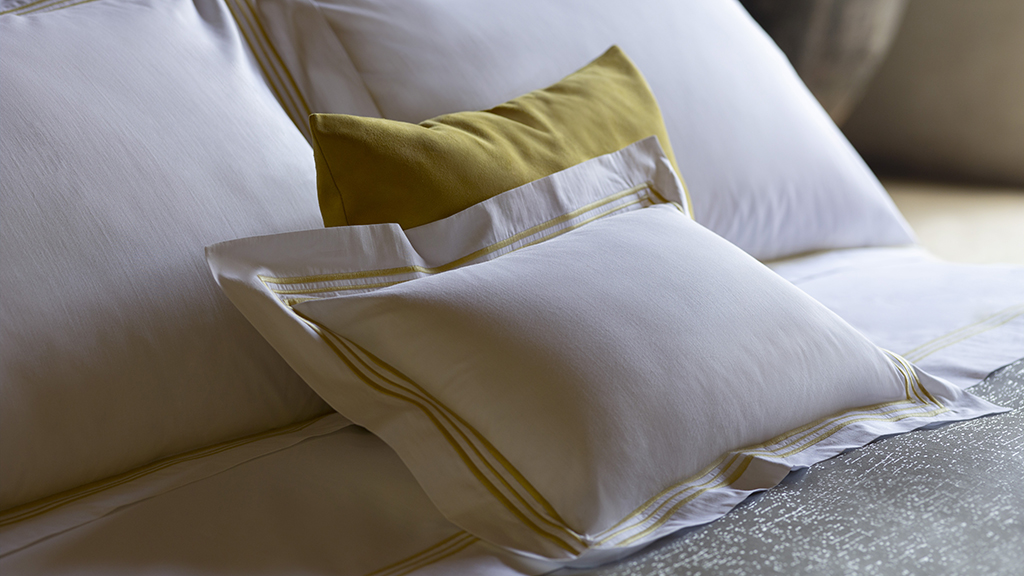 I learned throughout this process that I’m not the biggest fan of percale overall—I’d prefer my sheets soft and cozy as opposed to light and airy, for the most part—but Matouk’s sheet set impressed me in spite of these personal biases. The Allegro set in particular is distinguished by its applique stripes. It has a thread count of 600 and is made entirely of Egyptian cotton. I found them to be not only characteristically crisp, but also undeniably comfortable. This means they’re especially great for making up a stylish summer bed. 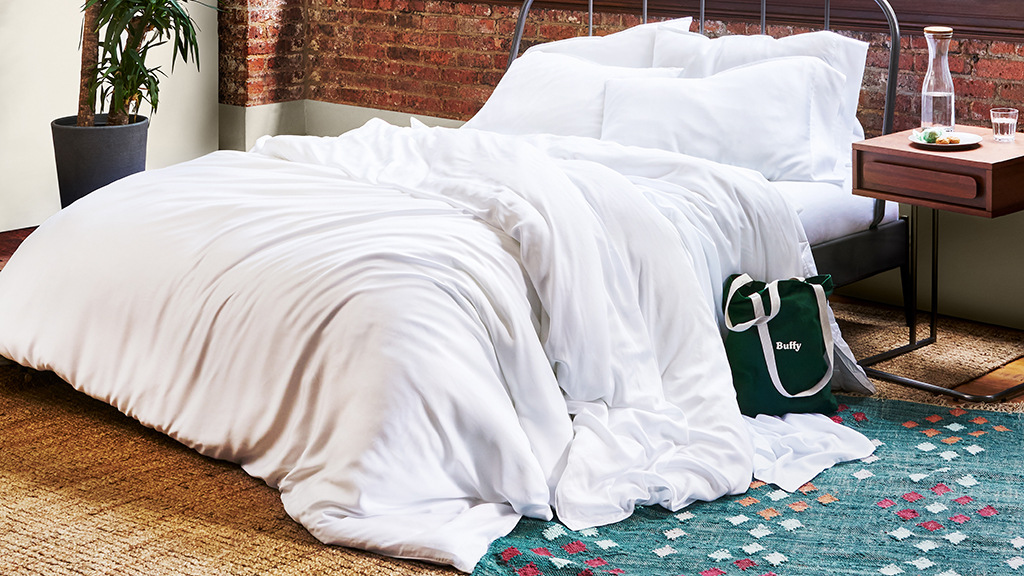 A more sustainably made set of sheets sounds great, of course, but the idea of weaving eucalyptus fiber into a comfortable bed sheet also sounded a bit out there. I was pleasantly surprised though, because these sheets are soft. Noticeably softer than most of the other cotton-based sheets that I tried, in fact. Altogether they’re 300-count sheets—but again, numbers aren’t everything when it comes to luxury bedding, and they don’t exist in a vacuum. As a bonus, interested buyers can opt for a free trial if, like me, you want to get a feel for the material before fully committing. 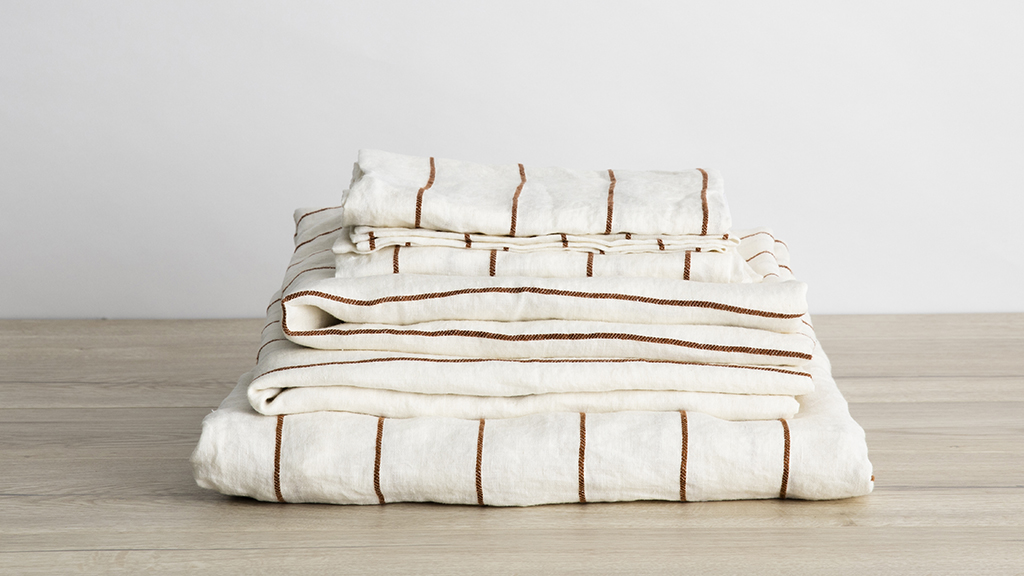 These are my new go-to summer set. They’re light, breathable and soft, so I felt sufficiently cocooned without sweating like crazy, even when it was warm outside. The number of color options is another big perk here—Cultiver offers a wide array of muted neutrals, as well as a few striped sets. The one downside that I found during my time with them is one that’s characteristic of linen sheets: They wrinkle. But some might prefer that informal look to a more put-together sateen. It’s also worth noting that thread count isn’t really a valuable metric when it comes to linen sheets: It’s a thicker fiber, so counts are naturally much lower. Be wary of any linen-first brand that touts a high thread counts. 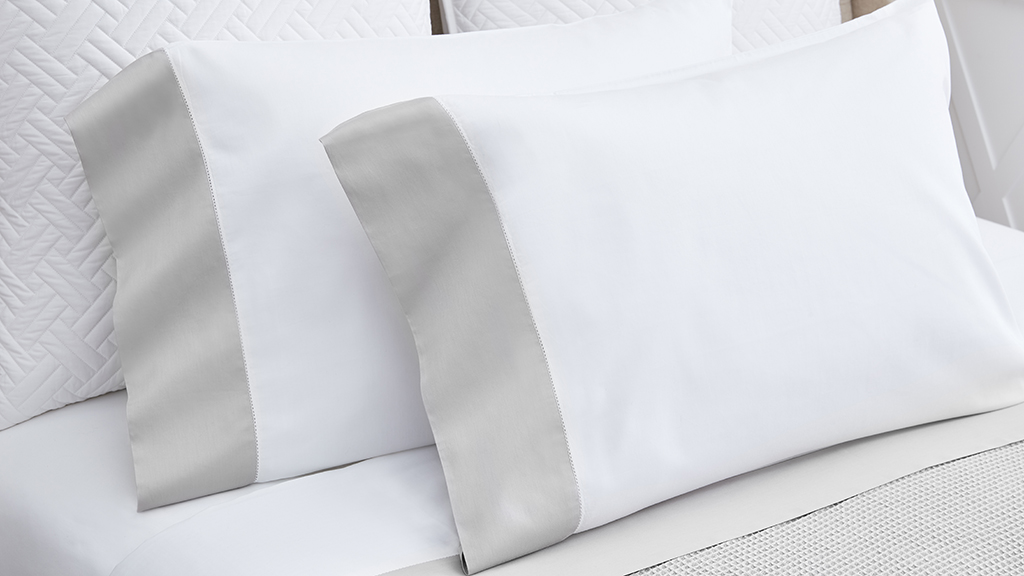 Talk about bang for your buck. Boll & Branch offers one of the more affordable sateen sheet sets out there—it felt on par with some of the pricier options that I tried in that category. I did launder these a number of times throughout the course of the few days that I slept on them, as the brand promises they get softer after each wash. I found that to be true, and if you purchase this set, I highly recommend you do the same. They feel fine after one cycle, but don’t really reach their full potential until a few times through the wash. Maybe that’s their tradeoff: More affordable, but a bit more work upfront. 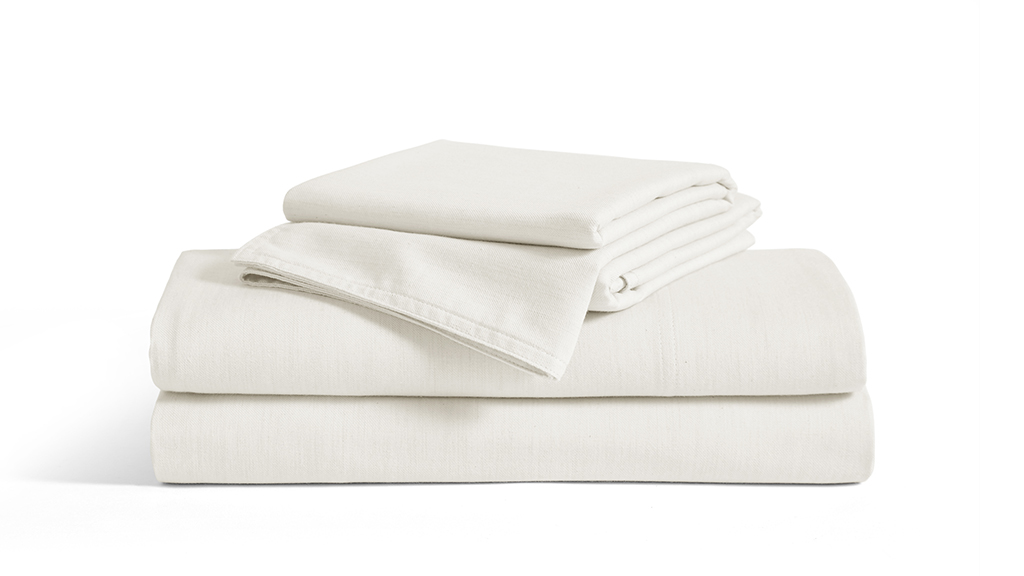 The idea of cashmere sheets sounds really great. Who wouldn’t want to be wrapped up in one of the softest textiles in the world while catching some z’s? The reality is a bit less so, as they’re really only five percent cashmere and 95 percent cotton. Still, they were some of the warmest sheets I tried. I found that the blend of cashmere plus cotton kept them from feeling too stifling as well—too much of the sought-after wool might have made me feel more sweaty and claustrophobic than anything else. It’s worth noting that Brooklinen markets these as a limited-edition set, so get them before they’re gone if you’re interested.

This might sound like a weird superlative to give to a set of sheets, but hear me out. Ralph Lauren’s Shirting collection… feels like you’re sleeping on a shirt. That’s not to its detriment, either, as I found myself snoozing very comfortably with these, although at a certain point I did feel a bit like I was spending the night at a bespoke tailoring shop. I love the design of these because they really nailed the look of a well-tailored shirt, from the little buttons on the pillowcases to the striped patterns. 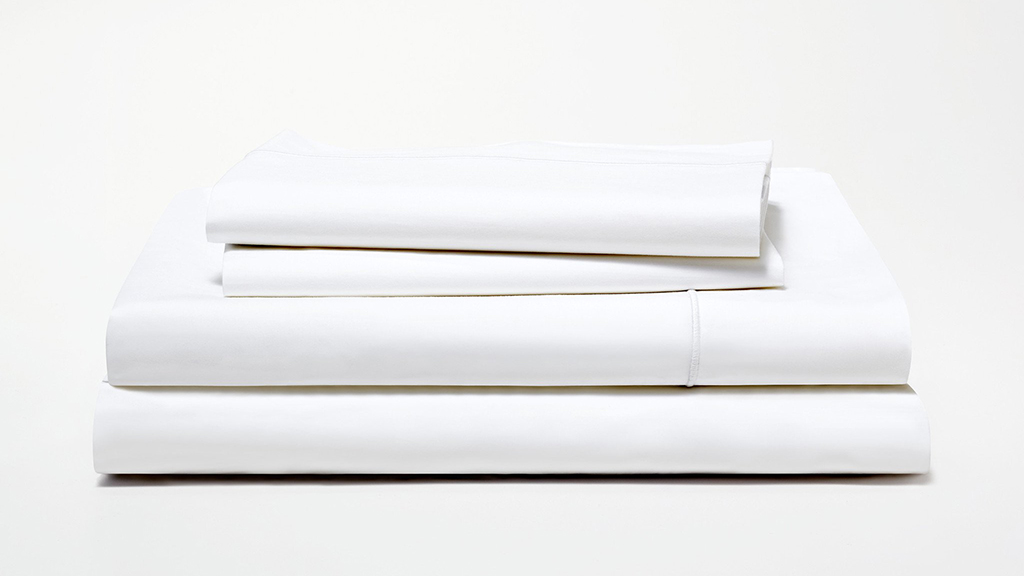 I used these sheets right after staying in a high-end hotel that I didn’t want to leave, so I can confidently say they are very reminiscent of a luxe suite’s bedding. Like all Frette sheets, their thread count sits somewhere in the range of 200 to 240, and this set is made with a crisp percale weave. I think that materiality just wasn’t my favorite, as I do tend to lean toward softer rather than crisper sheets, but if you prefer the smooth feeling of percale, this is one set you shouldn’t miss. 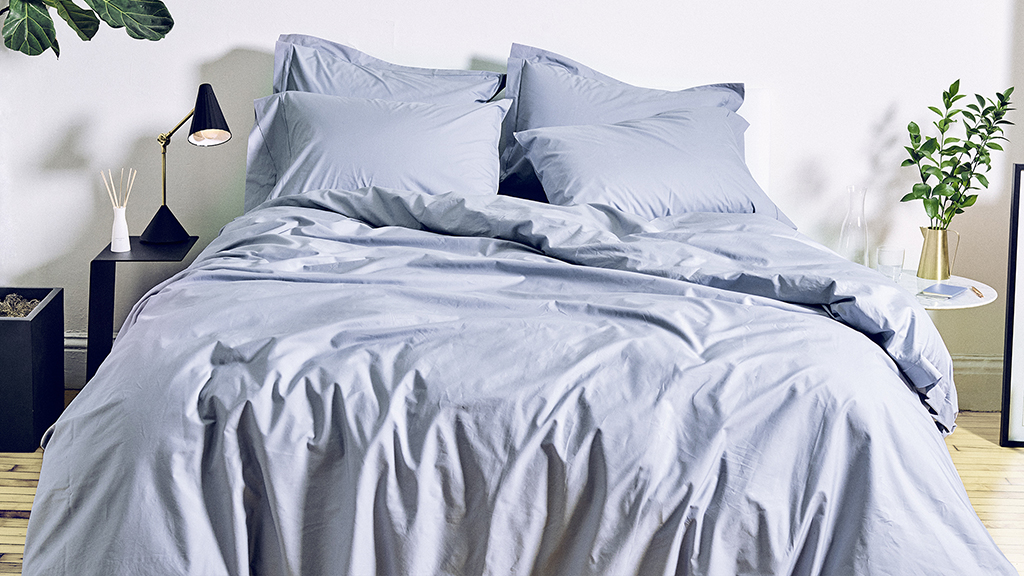 Again, I think I prefer a softer sheet to a crispier one, so my own personal biases may have gotten in the way a bit here. That being said, these are great sheets. They have a thread count of 500 and were super breathable—a great quality overall, especially considering the lower price point.

Forget Length. A New Generation of Wide-Bodied Yachts Is Adding a Fresh Dimension to Onboard Living.