About a year ago we first shared the news with the world small Dutch independent watchmaker Laurens de Rijke, working under the De Rijke & Co name, launched a Miffy-branded watch. The watch in question was the Miffy Moonphase, a very whimsical take on a classical moonphase. Using the rotatable case construction of the Amalfi collection, De Rijke & Co integrated the famous little bunny in a quirky yet very fitting way. Straddling the moon, an iconic image created by Dutchman Dick Bruna, Miffy traversed the night skies once a month. The watch quickly sold out, but now makes a return with an updated construction and new colours! 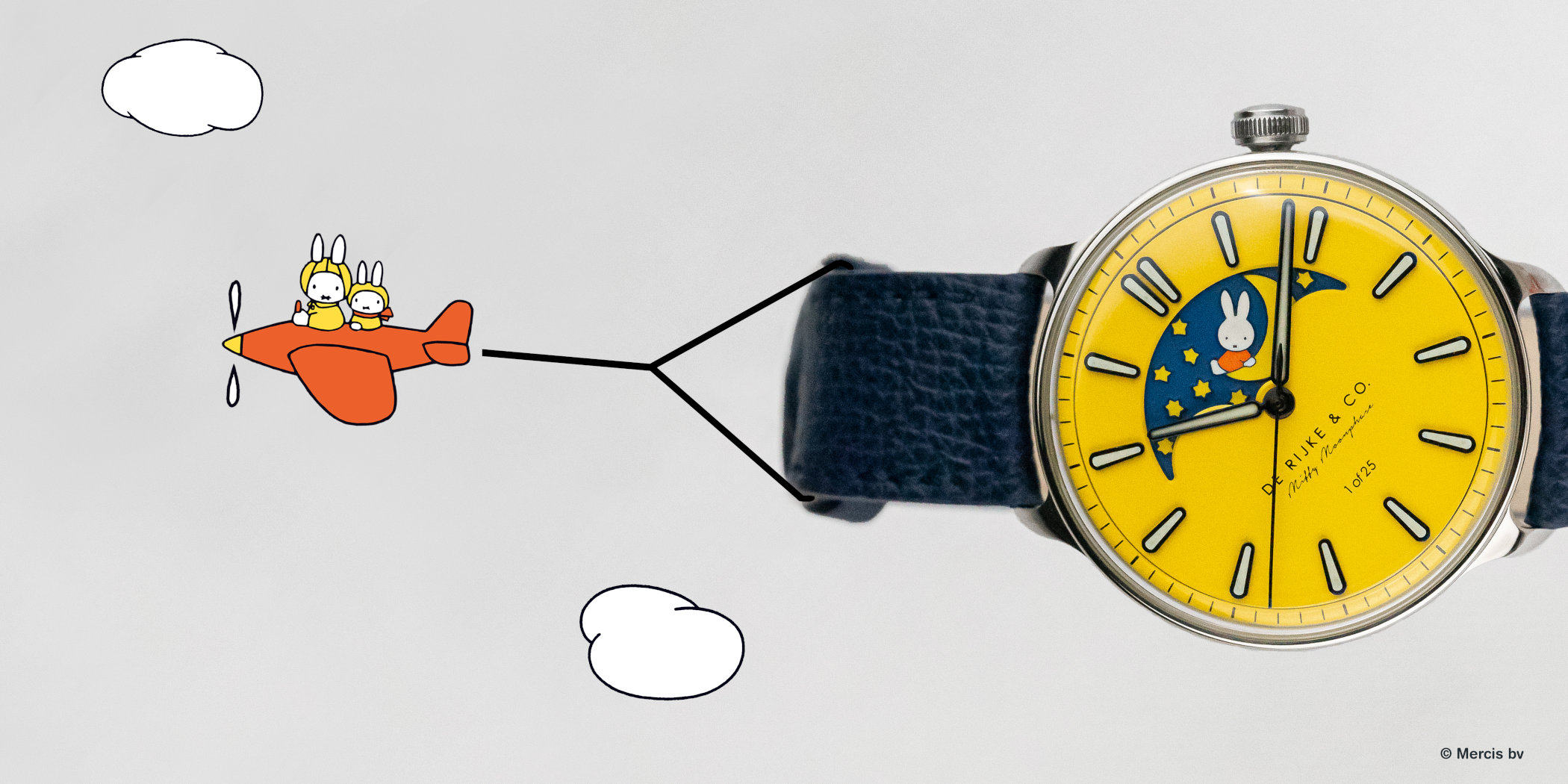 Laurens de Rijke set out creating watches following a monumental journey across Europe and into Asia on a vintage Vespa scooter. The goal was to travel to Mongolia, but he got stranded in Kyrgyzstan when the Vespa was sadly beyond repair. During his travels, he bought an old Vostok watch, which would be the spark he needed to create his own driver’s watch a few years later, the Amalfi Series I. It featured a unique rotating case construction which allows you to wear the watch with the dial facing up (so noon at noon) or rotate it 90 degrees and have noon at three.

The new iteration of the Miffy Moonphase watch follows the same very principle of the Miffy Moonphase launched last year but with a few tweaks. The watch still measures 38mm in diameter and still has that signature rotatability. However, the construction has been slightly reworked. It is a tiny bit thicker to allow for more room for the hands. This also resulted in a higher domed sapphire crystal, and it now has more traditional lugs instead of the fixed lugs De Rijke & Co is known for. The extra height was also needed to give the Miffy Moonphase complication more depth, as the brass disc is now thicker, allowing for deeper laser-etched imagery. 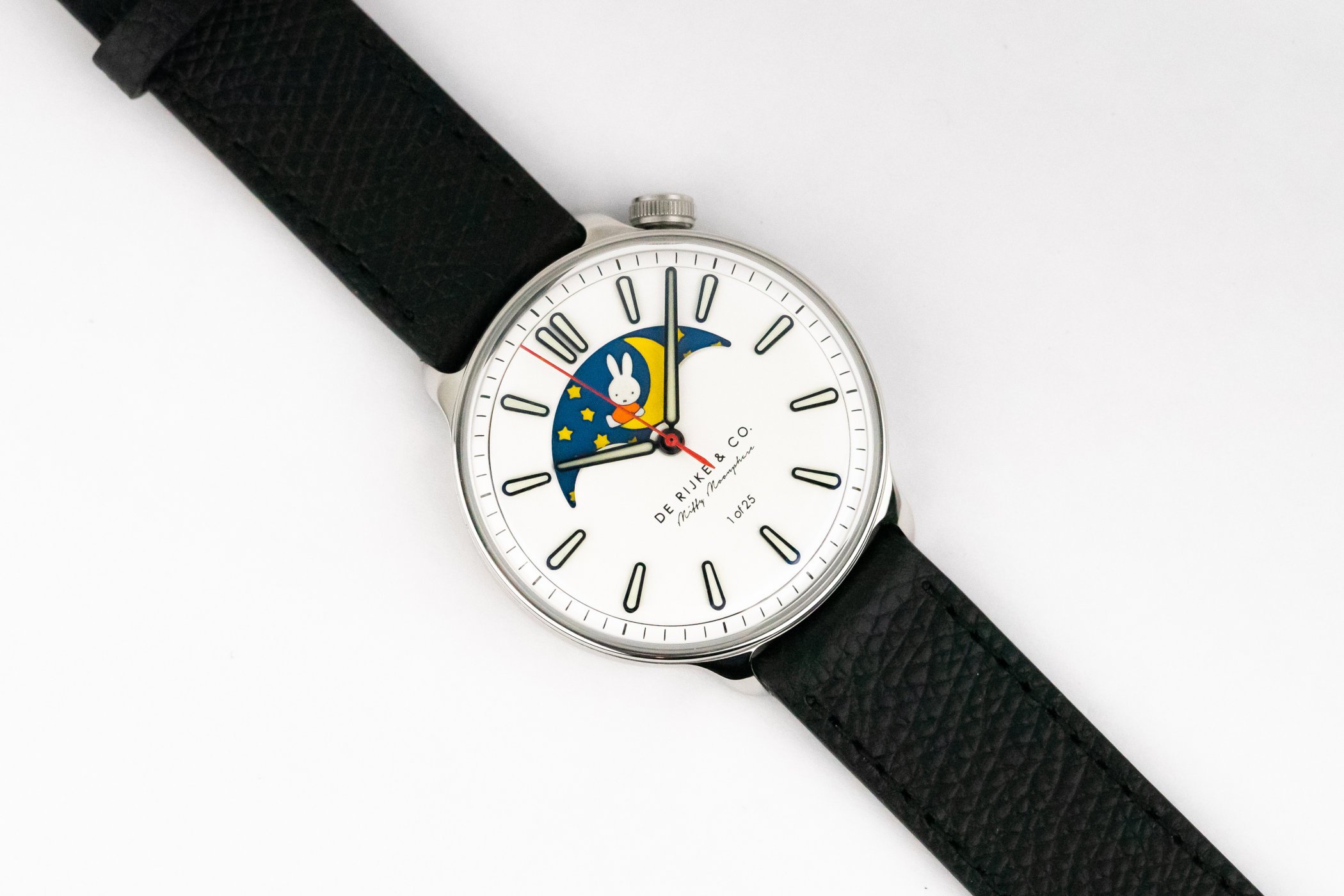 The dial has the same configuration but is now done in white, yellow or reddish-orange. All colours, just like the blue dial last year, are official Miffy colours. Each one is finished with a minute track on the outer edge, applied hour indices (a double one at twelve) and De Rijke & Co’s signature hands. The markers and hands have a black outline and a Super-LumiNova insert. But of course, your eyes are immediately drawn to Miffy leisurely sitting on top of the moon. The moonphase disc is entirely lacquered by hand, with the stars alone taking up to an hour. Thanks to the slight increase in thickness, the image appears a bit sharper. Miffy, and the stars and moon surrounding her by the way, light up at night thanks to the application of Super-LumiNova. 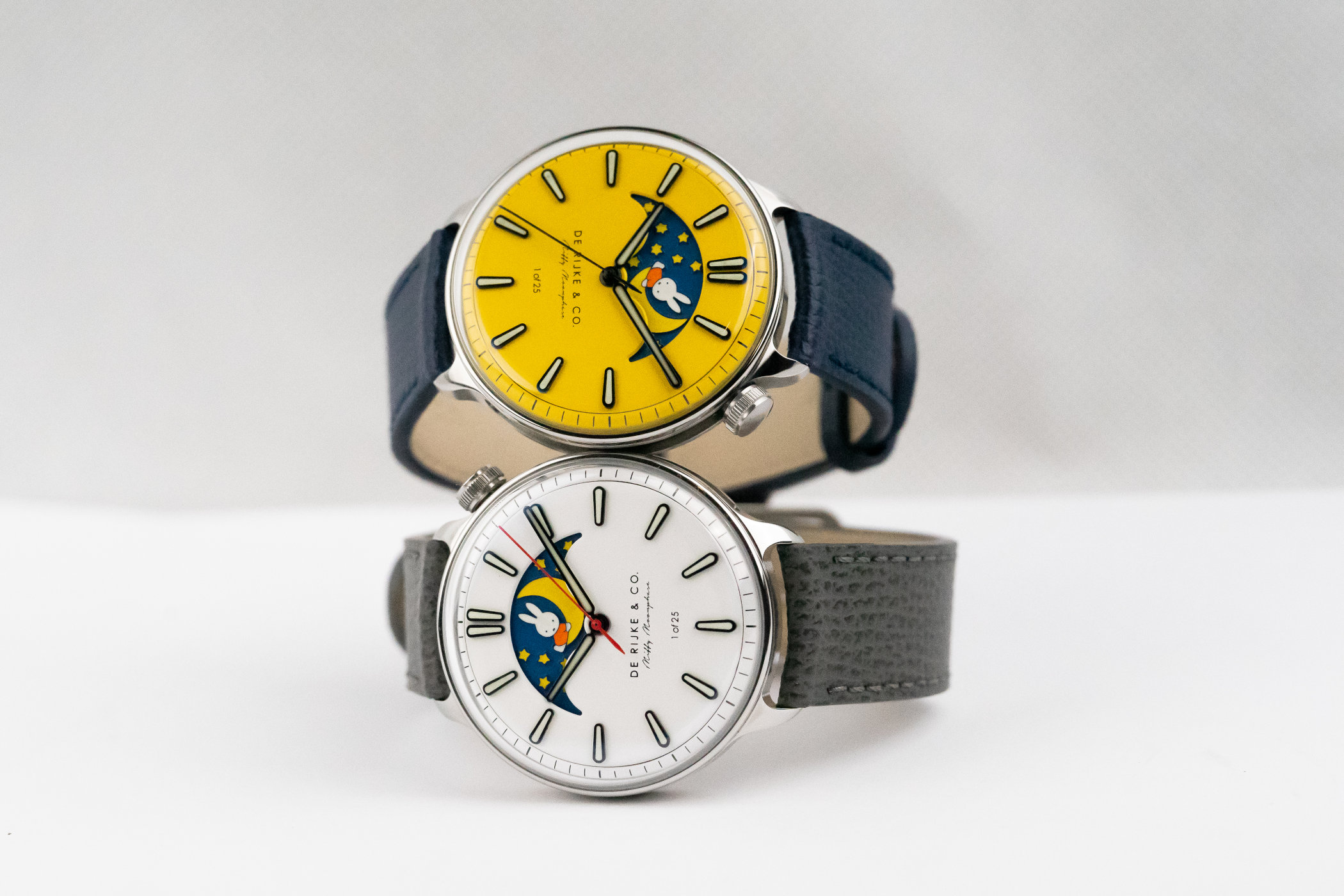 In terms of the movement, nothing has changed. De Rijke & Co still uses the automatic Sellita SW 288-1, which has a moonphase indication (obviously) next to the central hours, minutes and seconds. It uses 26 jewels in total, runs at a rate of 28,800vph and has a power reserve of 38 hours. It’s again hidden from view by the closed caseback engraved with Miffy’s outline while holding a balloon.

This second series of the De Rijke & Co x Miffy Moonphase is worn on a leather strap, secured with a pin buckle. Thanks to the new construction of the case and lugs, it is attached with curved spring bars instead of being looped through and closed with a stud. Each dial colour is limited to 25 pieces and the price is set at EUR 2.888 before taxes. The watches can be pre-ordered later this week.

Availability: Limited to 25 pieces per colour